The British know how to queue, as evidenced during a long day of filming for the BBC Antiques Roadshow at Compton Verney on Tuesday 2 July. 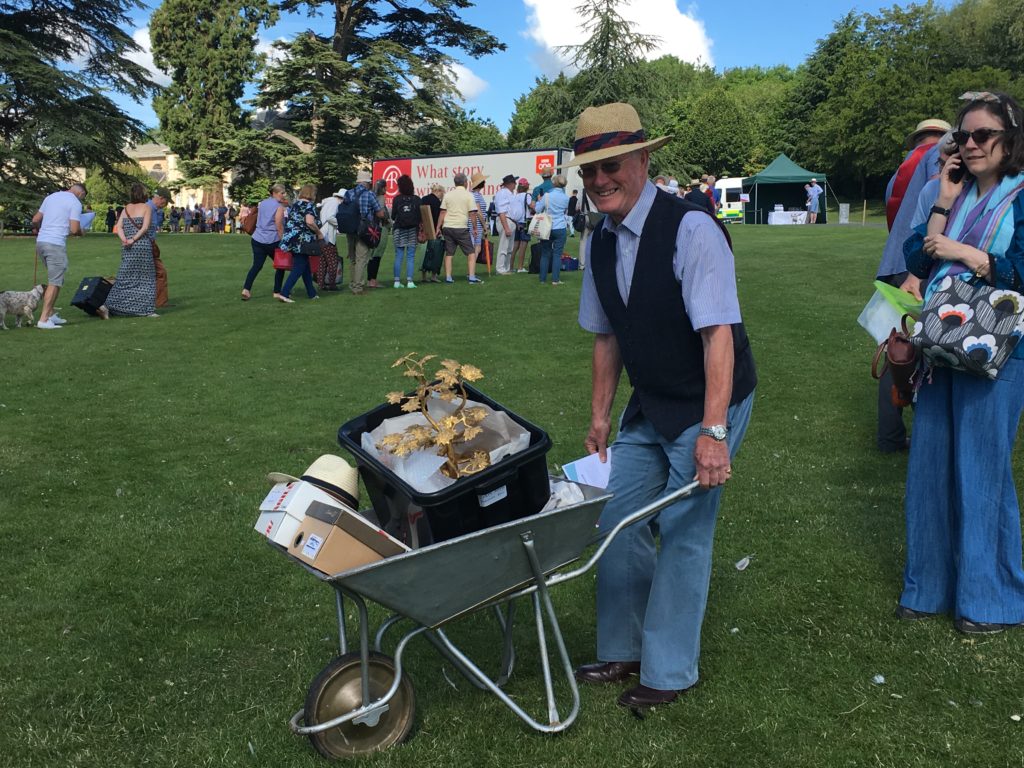 5300 people came to have their treasures assessed and their family stories heard. They arrived with carrier bags and boxes, newspaper wrapped packages and carrying improbably large paintings, furniture, teddy bears, and even a stag’s head slung over a young man’s shoulder. 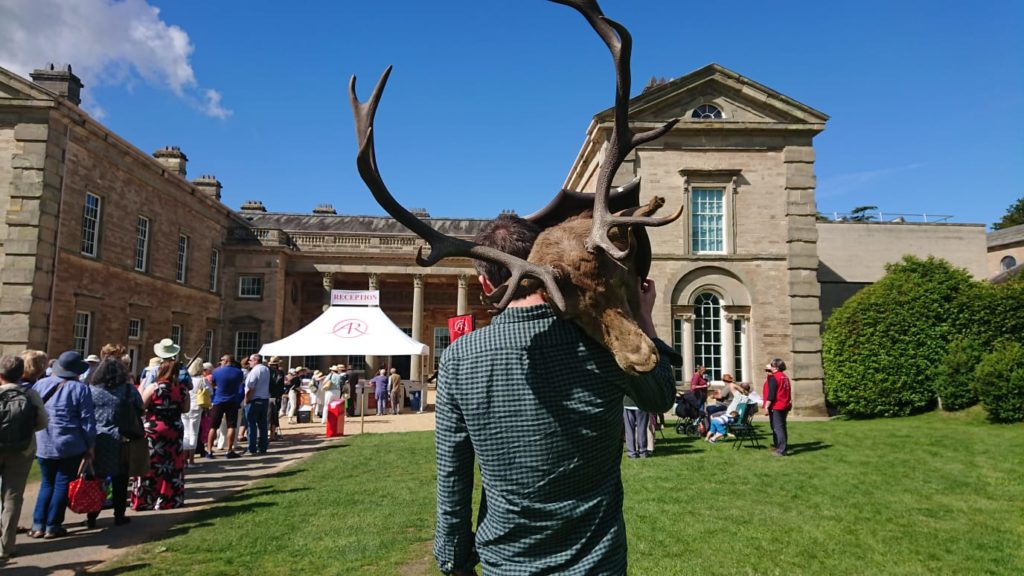 The show, hosted by Fiona Bruce, has been broadcasting for over 40 years and has a weekly audience of over 6 million people. 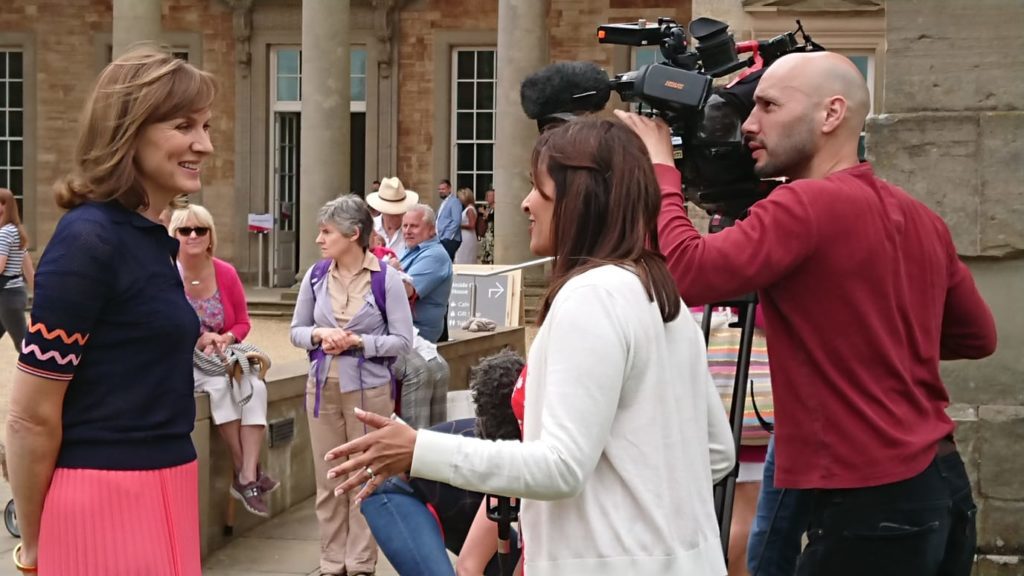 Over the years lost masterpieces have been uncovered and car-boot finds have been valued at hundreds and even thousands of pounds.  But above all, it is the stories connected with the items pulled from boxes and bags that really make their mark.  One visitor brought along a Victoria Cross while another brought a homemade Cup Final rosette, along with a photo of his parents on a coach of West Bromwich Albion fans heading down to London in 1950s. 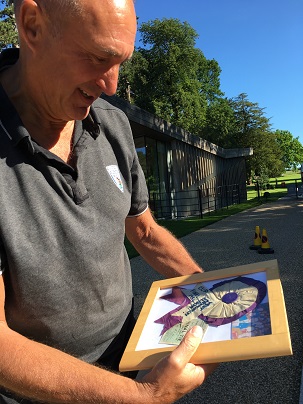 In monetary terms one was priceless, the other worthless, but in reality both were of significant sentimental value to their owners.

Fiona Bruce took time to chat to people in the queues, do local press interviews and, to the joy of some blushing teenagers, joined them for a selfie. 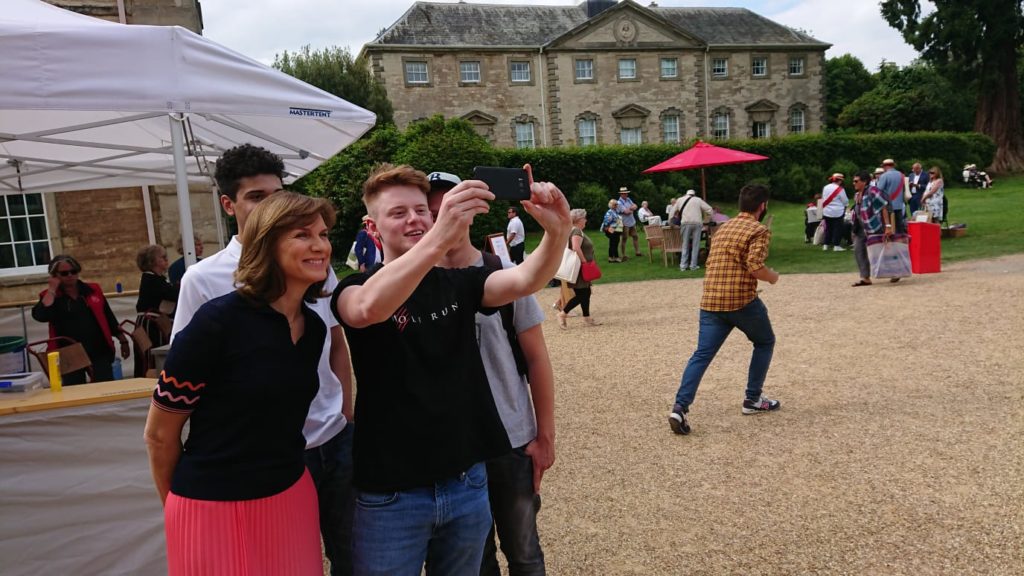 They were local students from Stratford College and the nearby high school at Kineton who were invited for a backstage tour with the production team to learn about what it takes to run an event like this. 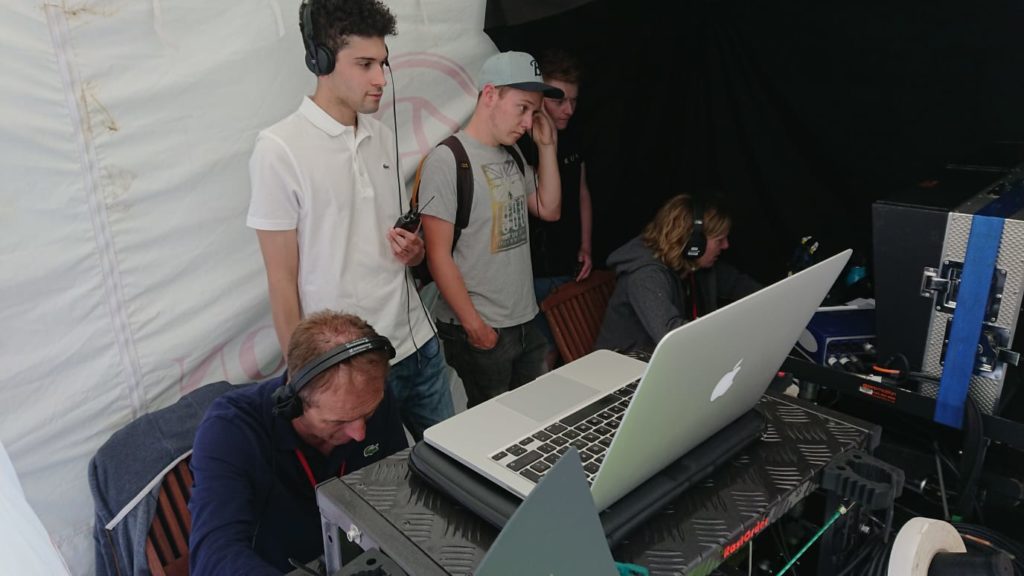 The wheels of such a huge enterprise have to be oiled through months of planning. Around the grounds, Compton Verney volunteers and staff were gaily dressed in straw boaters and red sashes, but that jolly front turned into a lifesaving team when one visitor collapsed on the way back to his car.

John Putt had been delighting Antiques Roadshow expert, Will Farmer with his huge collection of beautiful coffee cups. Filmed by BBC Midlands Today as he unwrapped cup after cup, Will told him that he was the reason why the Antiques Roadshow was so popular, 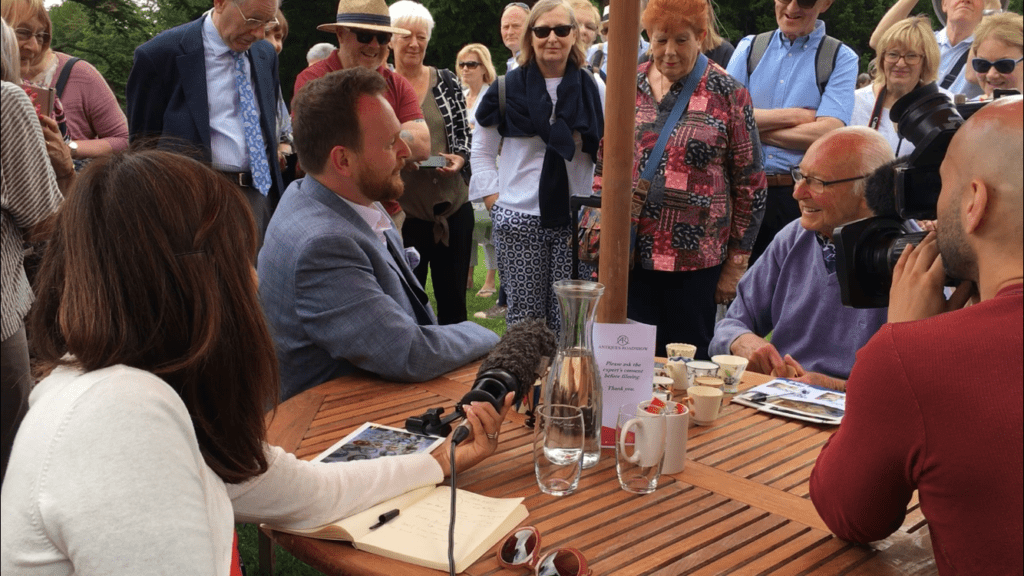 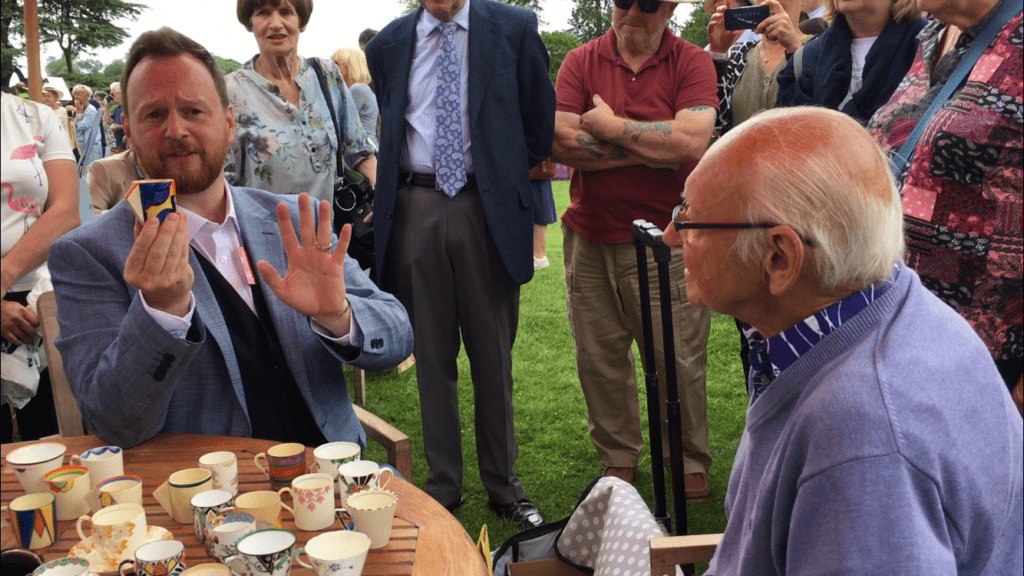 “You love the things you collect and you have a good eye.” Holding up a Clarice Cliff cup he told John, “This is one is worth £200 alone.”  But as John headed back to his car he had a heart attack. He was immediately helped by a member of the public who started CPR. As the air ambulance was called, two members of Compton Verney staff took over CPR and gave mouth to mouth resuscitation.

John is recovering well. His wife, Madeline thanked Compton Verney and BBC staff, as well as the member of public, saying “If it was going to happen, it happened in the right place. He was surrounded by angels on the ground.”

For most it was the first time they’d been to the Antiques Roadshow, but there were a few veterans about. John from Badsey near Evesham has been following the BBC crew around the country for 20 years with this being his 293rd show. It also brought plenty of new visitors to Compton Verney, many of whom we will be welcoming back throughout the summer, armed with an exclusive discount on their return entry which was given out on the day.

You’ll have to wait until the show is aired either later this year or early next year to discover the joys of the day. In the meantime, look out for Fiona at Wimbledon, she’s promised to wear the big blue hat she fell in love with from our shop. 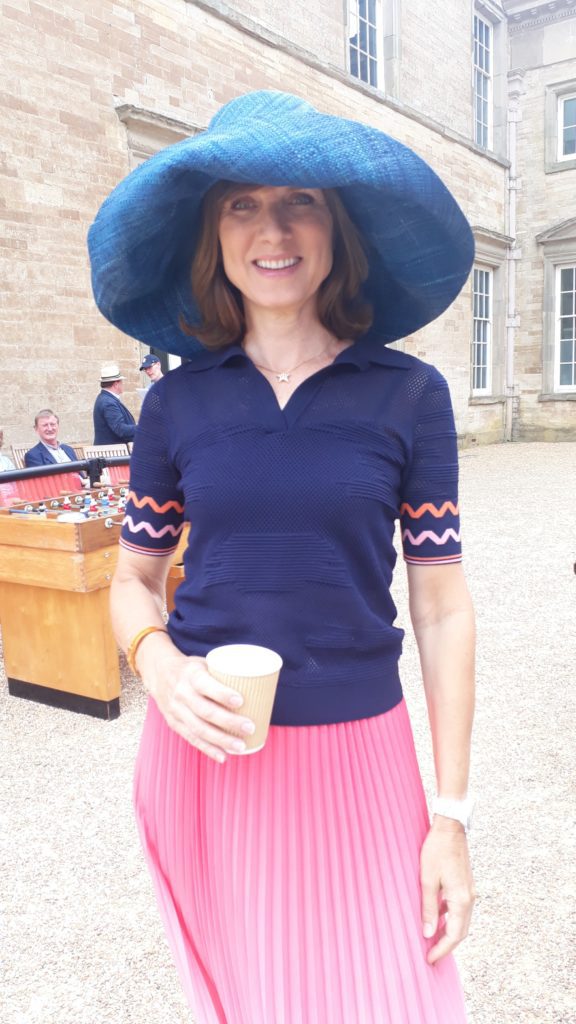 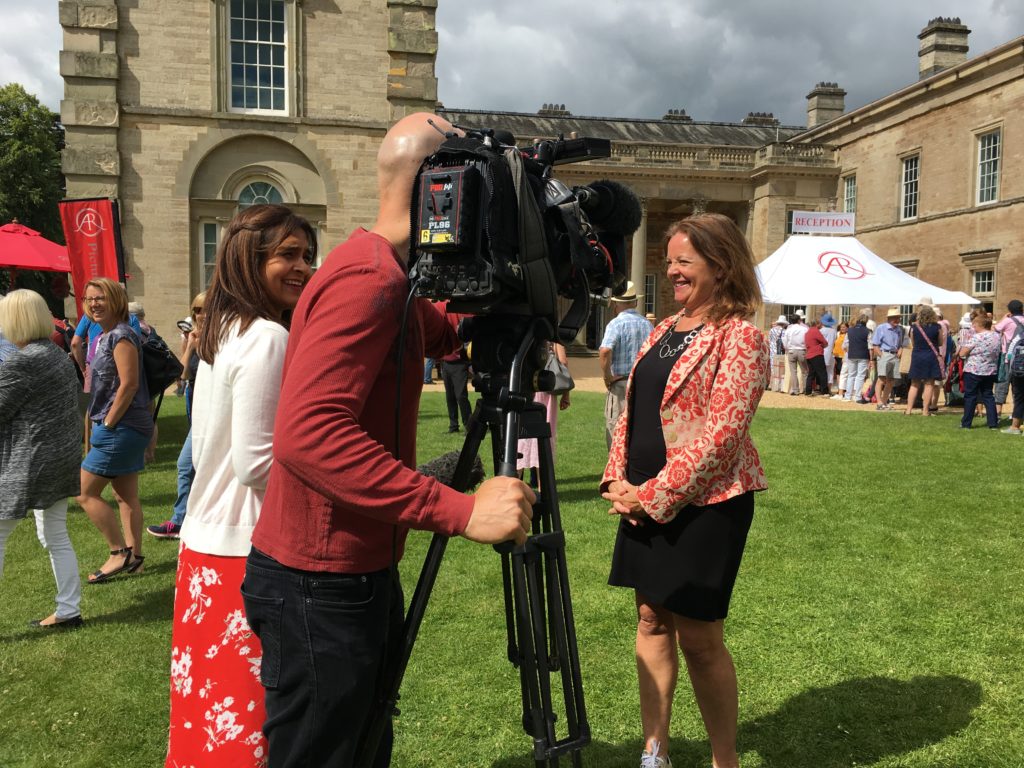 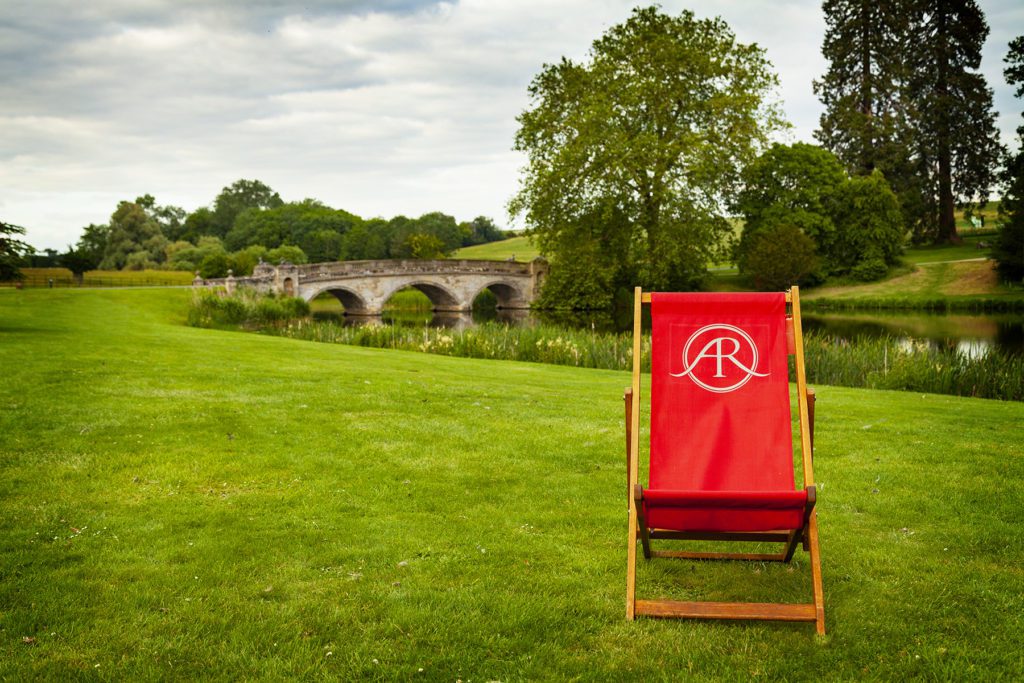 Photographer Anna Gordon gets inside one of the most successful television shows as the 40 year old roadshow arrives in Warwickshire.
https://bit.ly/2S2nt49