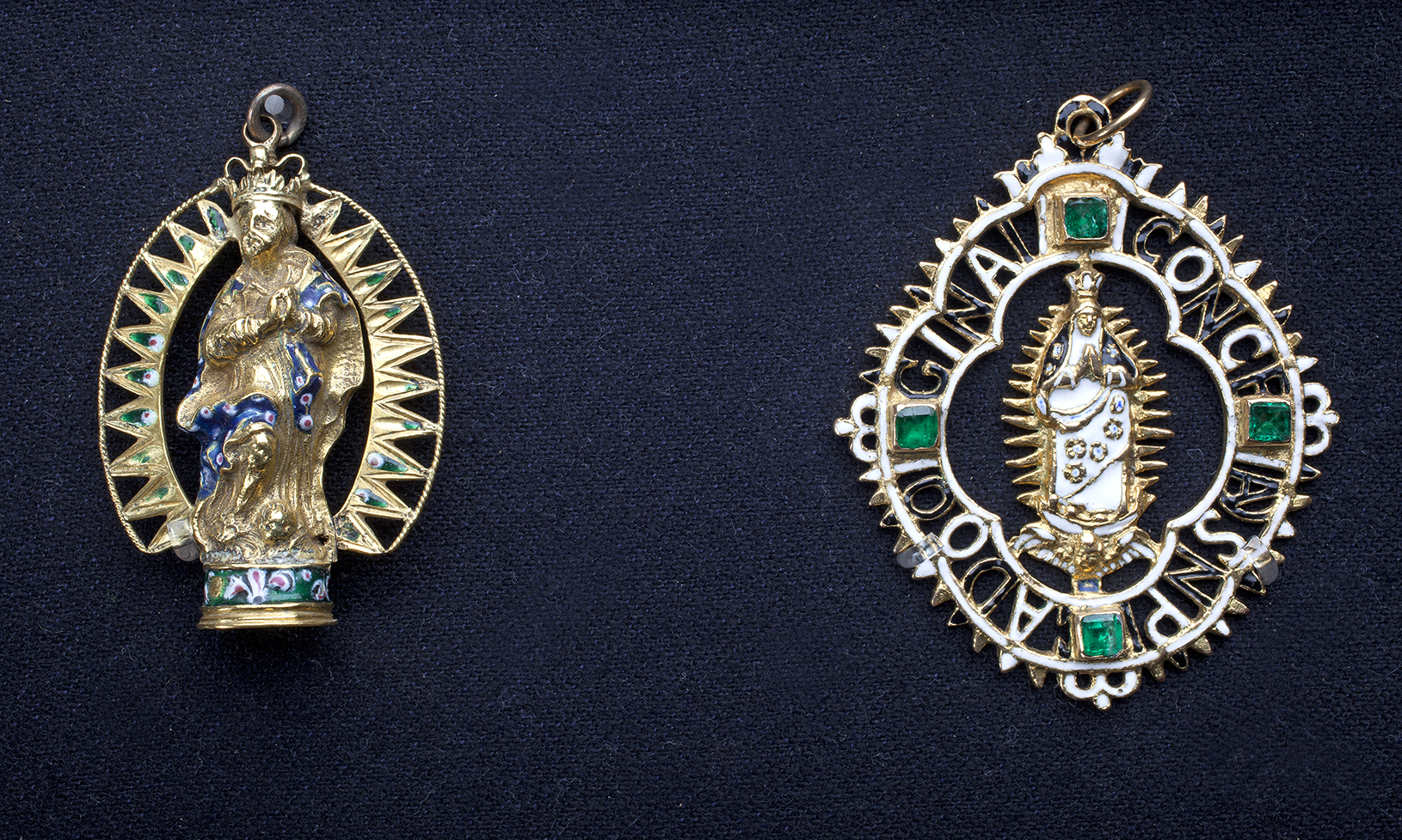 The collection of paintings from Naples at Compton Verney is among the finest in the world. But Sir Peter Moores also collected some exquisite decorative art objects, which have received far less attention.

Art history as a discipline has traditionally overlooked the decorative arts (such as furniture, ceramics, metalwork and textiles) in favour of architecture, sculpture and most particularly painting. In Naples, strong dynastic and cultural links with the Spanish court as well as a thriving craft guild structure, gave the decorative arts a particularly important role. Interiors, whether in palaces and churches, combined paintings, sculpture and architectural form with a variety of decorative finishes, as well as objets d’art made of a variety of materials. A display which focuses only on paintings is therefore misleading for our visitors.

This privileging of the so-called ‘fine’ arts over other art forms is something that has particularly concerned me as an art historian, having spent a large part of my earlier career at the Victoria and Albert Museum in London. The V&A collects a wide variety of media, and galleries like the Medieval and Renaissance Galleries, or the British Galleries, combine the different art forms to present as complete a picture as possible of the interiors in which these objects (and the paintings) would originally have been viewed and experienced. So when I had the opportunity to work with the Naples collection at Compton Verney this summer, I knew that I wanted to shine the spotlight a little more fully on objects other than paintings.

Three-dimensional objects in a museum setting usually have to be constrained in a display case for their own protection. Unlike a painting, where we can stand and look at it in exactly the same way as our seventeenth- and eighteenth-century counterparts, it is impossible to engage with these objects in the way for which they were designed. It is not possible to pick up and handle a small sculpture, or turn the pages of a book, and the two spectacular pendants promoting belief in the Immaculate Conception are unlikely ever to be worn again. To tackle this, I proposed a project to photograph and film the opening of two objects, so visitors to both the gallery and website can see how they would have been used. 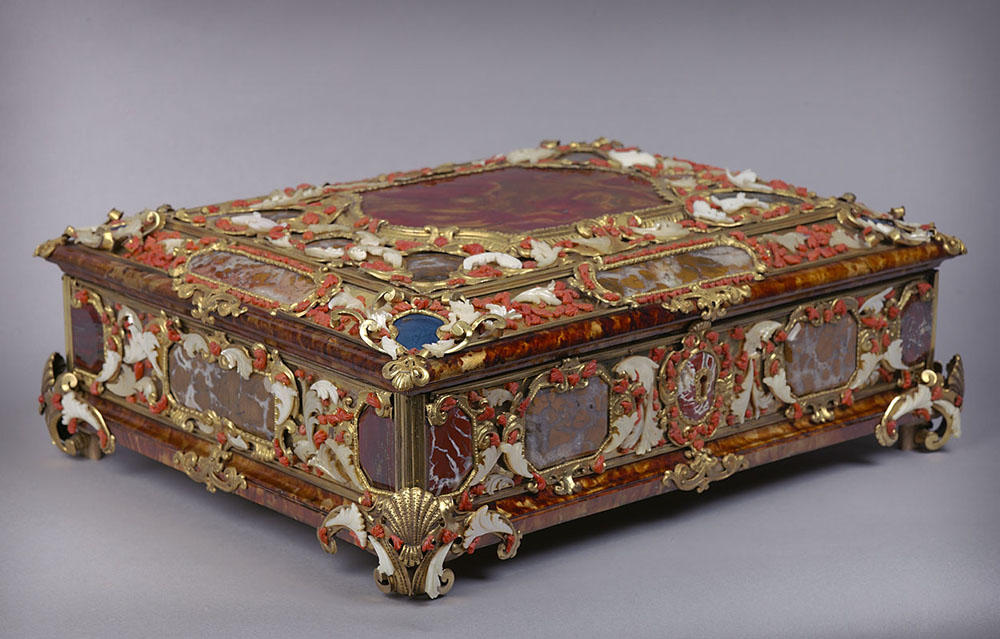 This casket was made in the early eighteenth century, possibly in the Trapani area of Sicily where an extensive industry worked the coral collected from the nearby sea, or in Naples, where coral was often combined with other exotic materials to create elaborate and luxurious objects. This casket uses coral, mother-of-pearl, jasper, agate, moss agate and lapis lazuli, overlaid onto a wooden core, and held together with gilded brass mounts. Its component materials already tell a story of extensive trade networks, as well as Neapolitan luxury and fascination with the exotic: the lapis lazuli for example came from what is now Afghanistan, while the mother-of-pearl may have come from the Philippines via Spanish trade networks. The casket would have been used to store precious items or letters, and of course opening it up would have been an integral part of the owner’s experience of the object. A conservation report on file reveals a further secret: a tiny compartment in the lid which opens separately, and which is operated by means of a discreetly-positioned button on the front. 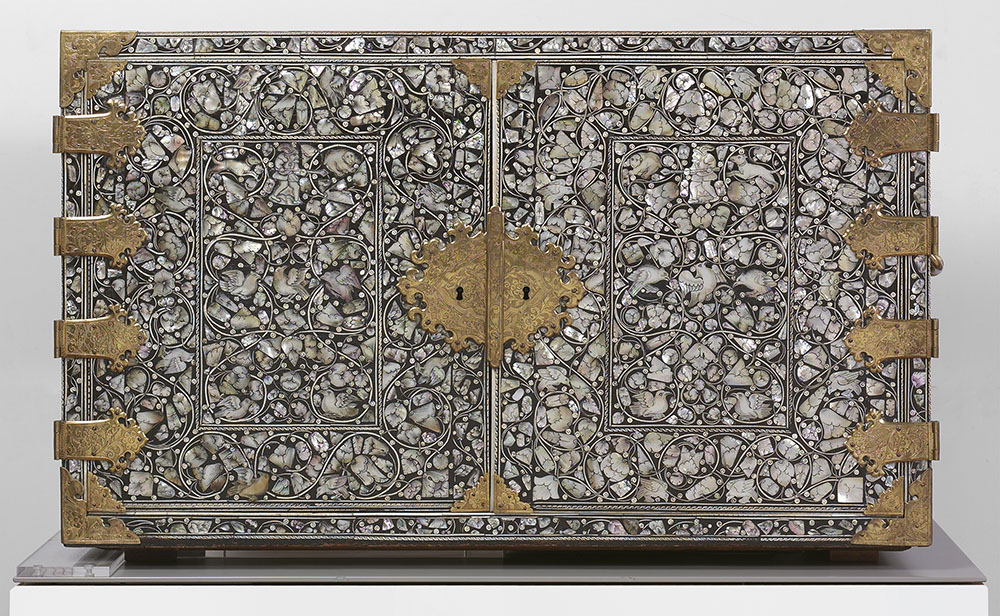 The opportunity to open up this complex cabinet would also hugely enhance the relatively static experience of the viewer in the gallery. While the outside (thought to be reused from an earlier Spanish piece of furniture) is beautifully decorated with a complex surface pattern of inlaid mother-of-pearl, depicting bear hunting scenes, the ivory of the inside, engraved with scenes probably from the bible story of Esther, is typical of early seventeenth-century Naples. It is also an important reminder that narratives in Baroque Neapolitan interiors were not confined to paintings.

The interplay between the inside and the outside, facilitated by opening and closing the doors, is an important feature of this composite object, and the smaller doors and drawers inside also open and close. Like all the three-dimensional objects in this collection, it was not made to stand frozen in a museum setting, and opening up these enigmatic objects will enhance our understanding not just of the objects themselves, but also of the paintings around them.

In response to Eleanor’s research we are planning a series of live and digital events where visitors will be able to see these cabinets being opened up: please watch our website for details.