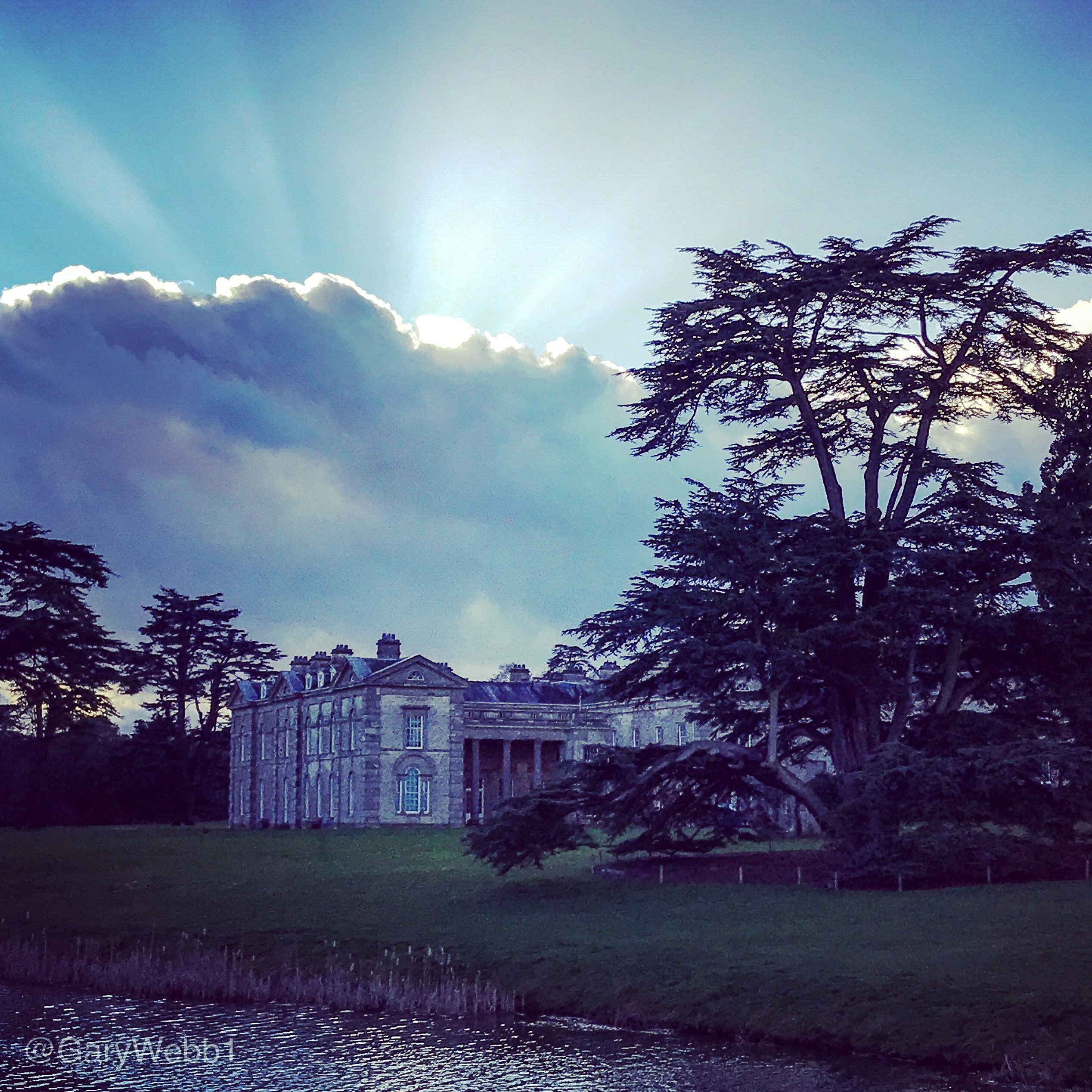 We’re moving rapidly into the month of April now, and whilst I set out to deliver a March Landscape & Garden Update, such has been the workflow that an April update is just having to suffice! 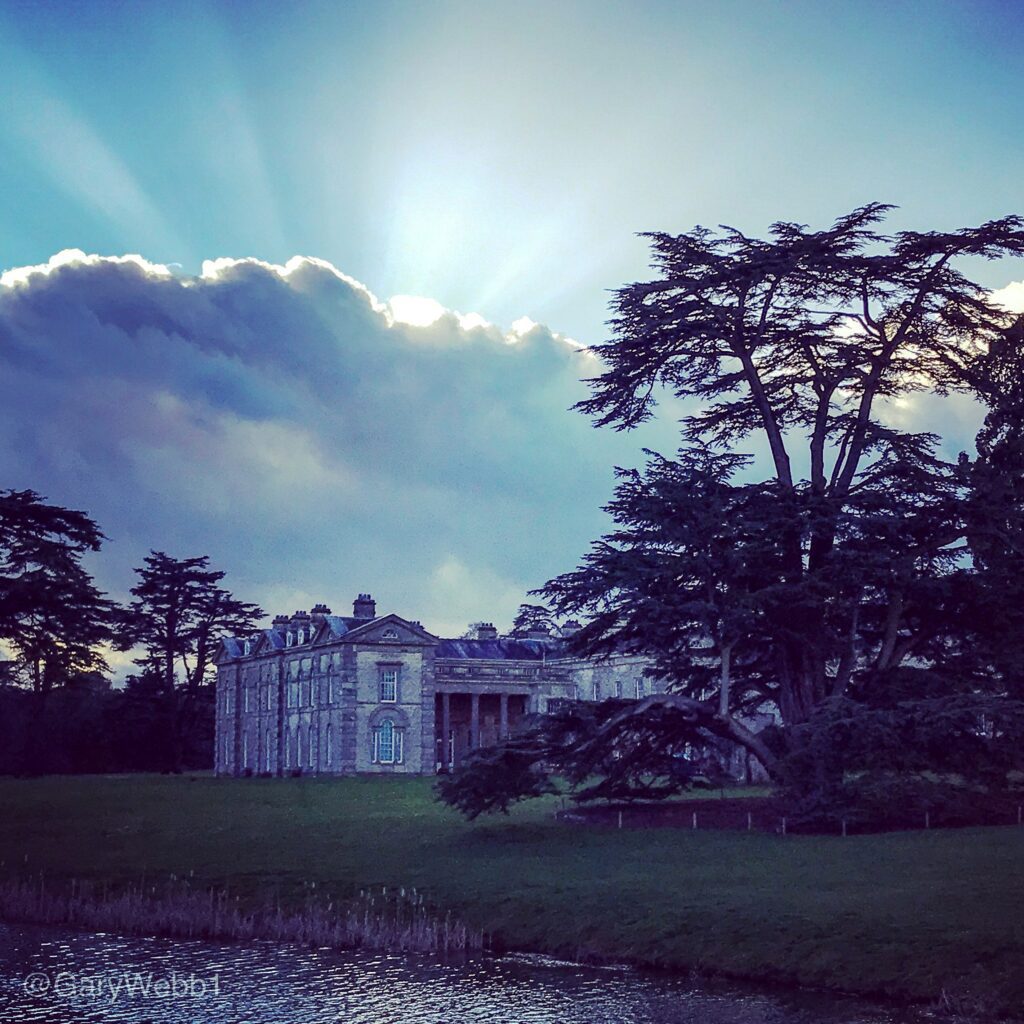 Looking across the lake at sunset, Compton Verney.

The variety of tasks the team has been involved with over the winter and early spring period has continued to grow and develop. If you have already visited I would hope evidence of our efforts is easy to see, but the key change you’ll initially witness as you arrive at Compton Verney is the new layout of the car park. Information relating to the improved car park is available on the website and in the Welcome Centre, and our staff can advise further, but suffice to say that we have lived through an intense period of activity that is coming to an end, with the final surface ‘dressing’ being applied when consistently warmer temperatures arrive. 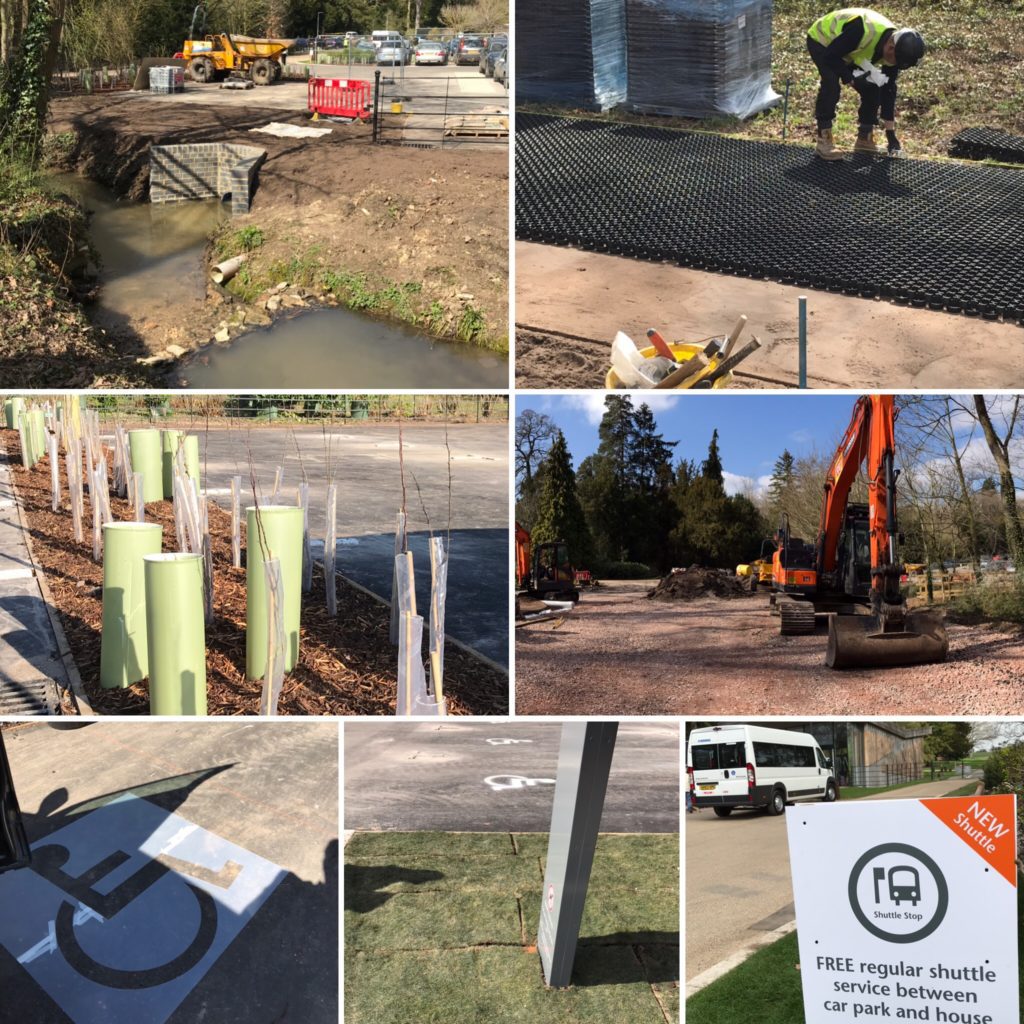 The park team of course had a good deal of input into the design of the car park, and particularly to the plantations that have been added both within and around the new areas. Many new oaks and field maples will eventually form a new tree canopy to the car park, which combined with the mixed native hedgerows and dense perimeter shrubberies; will eventually be even better for wildlife than before. I can hear the birds singing even before I open my car door each morning!

As with all new landscaping it will take a while to settle down, and a good deal of on-going maintenance, but we’re already seeing the benefits that a well-drained surface and more considered layout can bring. We hope you like it! 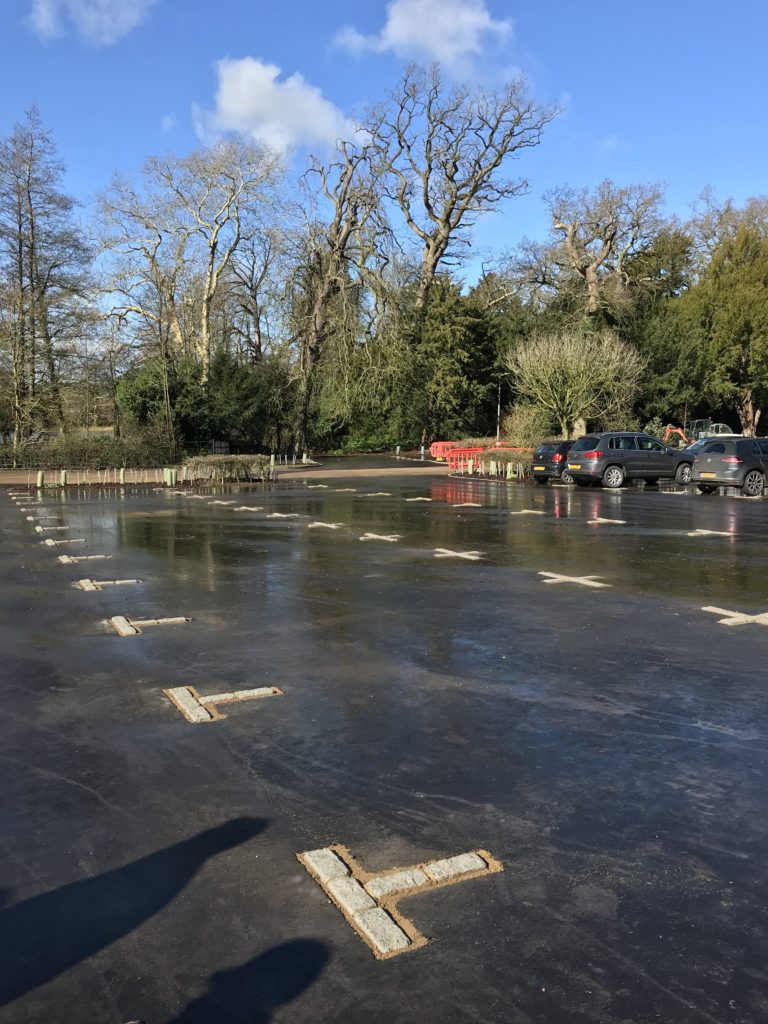 A reflective new car park for Compton Verney, until the final chipping layer arrives in summer.

Elsewhere there has been a wide range of park activity including many simple but essential tasks such as bench and bin renovation, and also some enjoyable planting activity. We especially enjoy planting for the opportunity it provides to make a difference for people and wildlife both in the present, and for the long term future of Compton Verney. It’s hard work given the type of ground, but is most certainly worth the investment.

A long awaited task was the replacement of some Old Town Meadow trees that hadn’t established well, along with the planting of some new specimen trees in the Ice House Coppice. One particular favourite of mine is the Broad-leaved Cockspur Thorn (Cretaegus x prunifolia,) which features glossy foliage, white flowers in May and red fruits into the autumn. We’ve chosen an edge-of-shrubbery position on the lakeside, so that its fine autumn colours can be enjoyed. 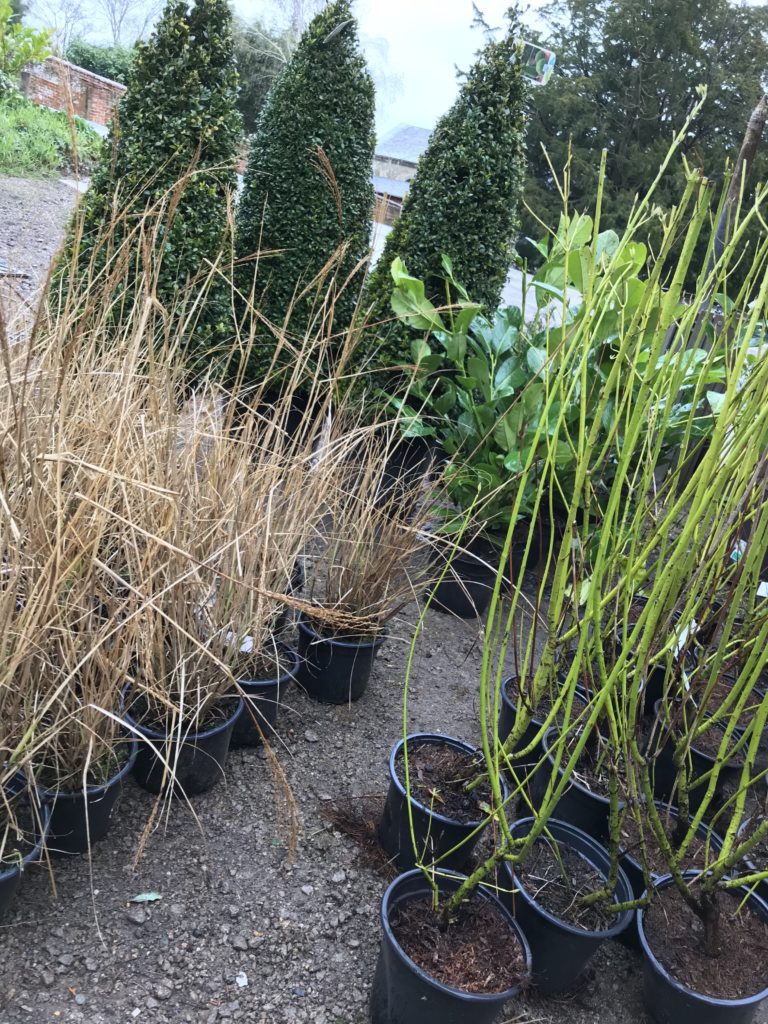 New plants for the park at Compton Verney.

We have also introduce some new stem colour near the Welcome Centre in the form of a Himalayan birch ‘Doorenbos’, (Betula utilis var. jacquemontii,) and near the lakeside with the golden-twig dogwood (Cornus sericea ‘Flaviramea’). Near to the willow tunnel we have Mountain Ash ‘Sheerwater Seedling’ (Sorbus aucuparia,) for some late season berry and foliage colour, and for some delicate early season colour a Cornelian cherry (Cornus mas,) and a witch hazel (Hamamelis × intermedia ‘Jelena’).

Naturally, our efforts towards boosting early season interest went a little further than the trees mentioned above. We naturalised significant numbers of bulbs back in the autumn, in an effort to line the main footpath that leads away from the Welcome Centre towards the Sphinx Bridge. Many of these have established well, giving a modest display through February and into March alongside a path restored previously during National Lottery Heritage Fund activity. It was great to see this new route establish, and to see people looking left and right at the blooms as they headed to the gallery. The simple plant palette here includes common snowdrop (Galanthus nivalis,) and wild daffodil (Narcissus pseudonarcissus). 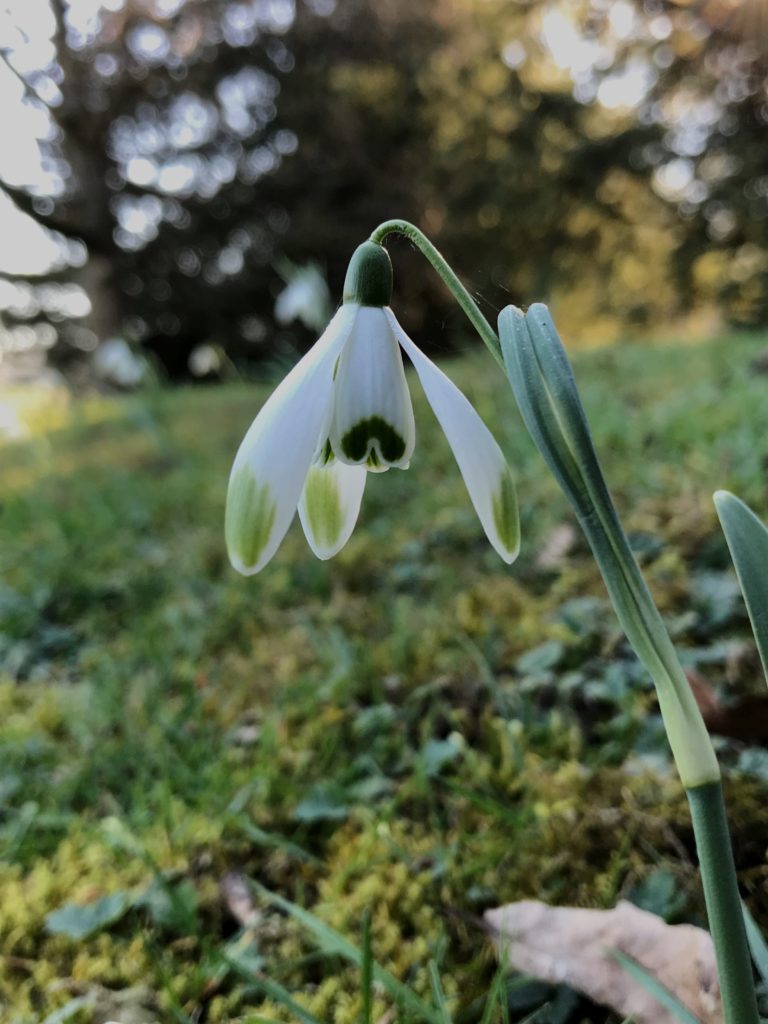 Galanthus nivalis ‘Viridapice’ in the grass at Compton Verney.

Lastly was the planting of some new snowdrop varieties in-the-green, in their very own drifts; drifts that I hope are the beginning of a new collection for Compton Verney. For this season we chose to plant some Galanthus woronowii, known as the giant snowdrop and some Galanthus nivalis ‘Viridapice’; both drifts amongst grassy blades near to the Ice House. 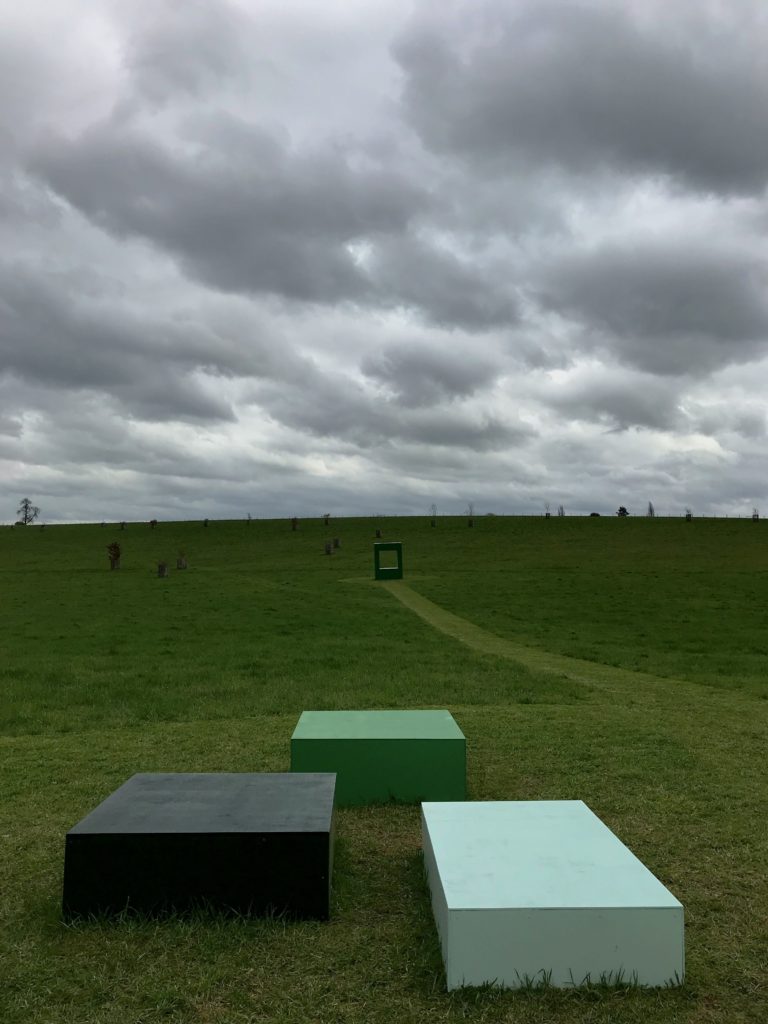 All of the above tasks, and a good few more besides kept us very active over the past months, which on the whole were very kind to us weather-wise. Looking forward, we shall be busy putting some new battery powered equipment through its paces and we’ll be box-mowing an area of Old Town Meadow regularly to support the latest Green Dwelling installation. I anticipate lots of irrigation and nurturing of the new planting, plenty of mowing, and a good deal of towards our new, park focussed family day ‘The Wilder Side of Compton Verney’ in July – do watch for news of this day if you’re a nature lover!

Until then, and as we approach the all-time knockout month of May (Everything is in growth mode in May!) I hope you’ll be able to pay us a visit to enjoy and see what we see every day; the glorious park that is Compton Verney. Do keep in touch on social media using the hashtags: #ComptonVerney #CVgrounds