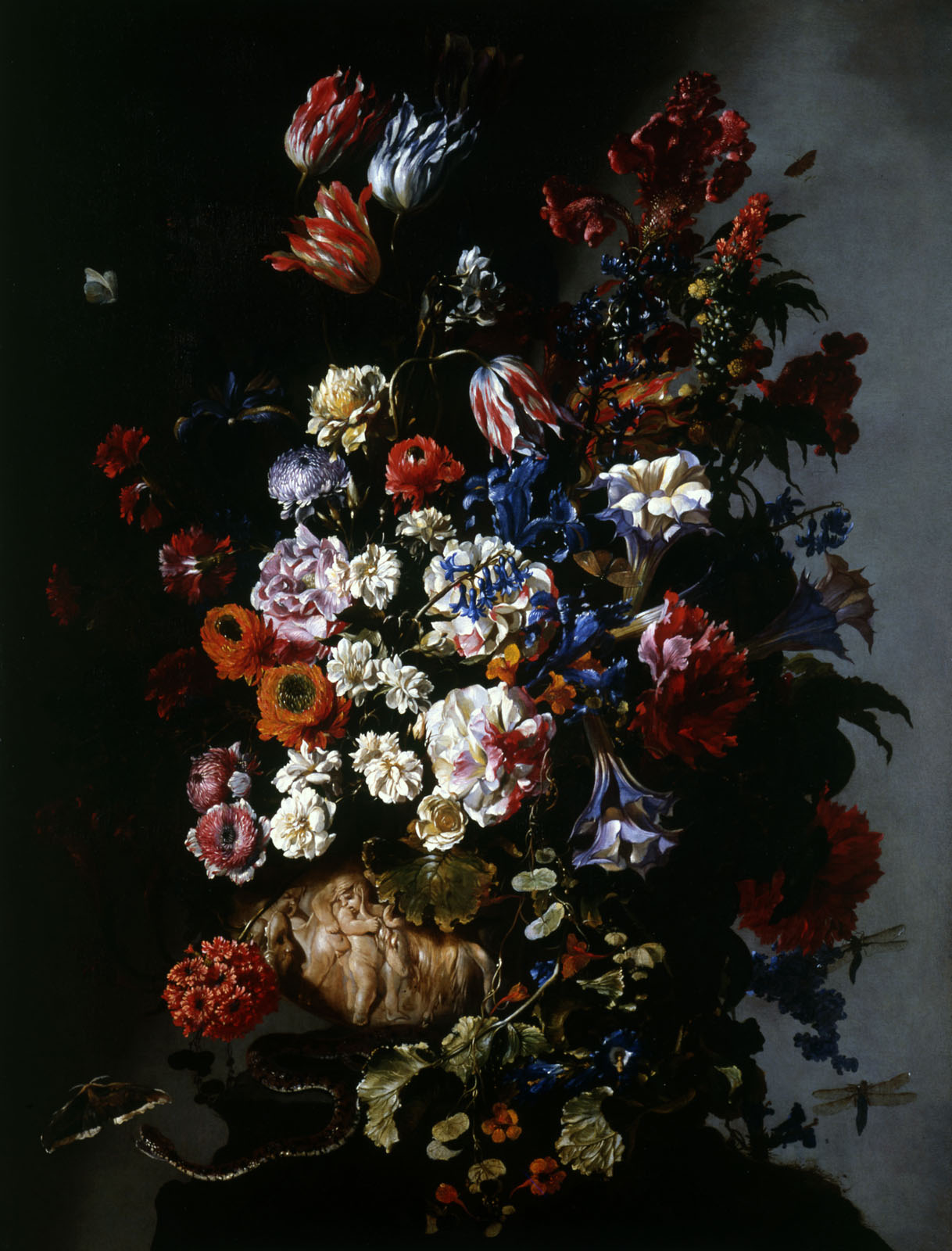 This summer visitors to Compton Verney have been experiencing the power of flowers through Rebecca Louise Law’s amazing installation Seasons and Mary Newcomb’s delightfully observed paintings in the exhibition Nature’s Canvas.

Flowers have been important in art for many centuries both because of their beauty and because from ancient times they have come to have special meanings, a kind of floral code used by artists to pass messages to the viewer.

Around 2000 years ago, in the time of the emperor Augustus, the Roman poet Ovid wrote a collection of tales called ‘Metamorphoses’  in which hapless nymphs, maidens and youths were often transformed into flowers, sometimes as a punishment for disappointing or defying the gods, sometimes as a means of escape. After they had died those who loved them sought to preserve their beauty and give them a new life. You may know the story of Narcissus, a vain and foolish youth who fell in love with his own reflection in a pool of water and pined away from unrequited passion. His sisters who were nymphs transformed his body into the daffodil-like flower which bears his name today and which in art has come to symbolise egotism, self love and stupidity.

There are examples of floral symbolism throughout our collections.

Netherlandish, The Virgin and Child, About 1518-50

In this small painting of the Virgin and Child in the Northern European Collection you can see a vase of lilies. White and unspotted, this flower stands for purity and has been associated with Mary from early Christian times. There are other flowers in the vase, all of which had significance to the sixteenth-century Christian. The rose had come to symbolise Mary’s inexhaustible love and charity. She was sometimes called ‘the rose without thorns’, being untouched by sin. The other flowers are thought to be carnations and irises, the one said to have grown where Mary’s tears fell as she accompanied Christ to the cross, and the others pointed petals symbolising the sword of sorrow which pierced her heart when he died.

In the British Portrait gallery we see flowers being used again to add depth and meaning to a painting. This time the message is not spiritual, but all about personal and political power.

Edward VI became King in 1547 at the age of ten and ruled for six years until his death in 1553. This portrait may have been painted for Michael Stanhope, who was an important member of the King’s household. Commissioning or owning a royal portrait was a way of demonstrating loyalty and this flattering picture is packed with messages and symbols which would have been readily understood in Tudor times.

The group of plants on the left of this unusual portrait are all heliotropic (ie they follow the sun), but here they are shown turning towards the radiant young king instead. Beginning at the left hand edge there are red and white Tudor roses, symbolising the unification of the Houses of Lancaster and York by his grandfather Henry VII, founder of the Tudor dynasty. The red rose of the Lancasters is dominant and the King holds one. Then we have the pot marigold, herb of the sun, and the dianthus or pink, known as Jupiter’s flower or flower of the gods. The heartsease, or pansy, is a symbol of thought and remembrance. The wild chicory (evoking the sky with its beautiful blue colour) flowers only in sunlight, and is fully focussed on the King.

Pansies appear in this portrait too. The child holds a bunch of pansies, a symbol of thought (and in particular of lost loved ones). He has a robin tied to a string, perhaps suggesting his innocence and fragility. Although he has coral bracelets at his wrists, worn by children to protect them from misfortune, the symbols may be telling us that this little boy has died. ‘There’s rosemary, that’s for remembrance. Pray you, love, remember. And there is pansies, that’s for thoughts’. Do you recognise this line from Shakespeare’s Hamlet, written at the time this painting was made? The words are spoken by Ophelia who is mourning her dead father.

As time passed flowers in art lost none of their power. In the seventeenth century still life paintings showing fabulous arrangements of flowers, such as this one in our Naples gallery, were popular. Artists used ‘’florilegia’’ (anthologies of flower images) to paint flowers which would not have been in season at the same time.

Paolo Porpora Still Life with Flowers in an Urn, Butterflies and a Snake About 1660

Colourful and stunning to look at, paintings like this still had hidden meaning. Flowers represent fertility and abundance but their beauty is short-lived. Alongside their splendour artists often included wilted blooms and fallen petals to remind the viewer of the transience of life and the inevitability of death. The message is that gaudy, worldy trappings amount to nothing in the end. Other symbols reinforce this. The butterfly, which can transform itself, escape the cocoon and fly away, traditionally represents the human soul and salvation. In this painting it is pursued by a snake, symbolising evil and sin. Flies, even dragonflies as here are used to remind us decay and corruption.