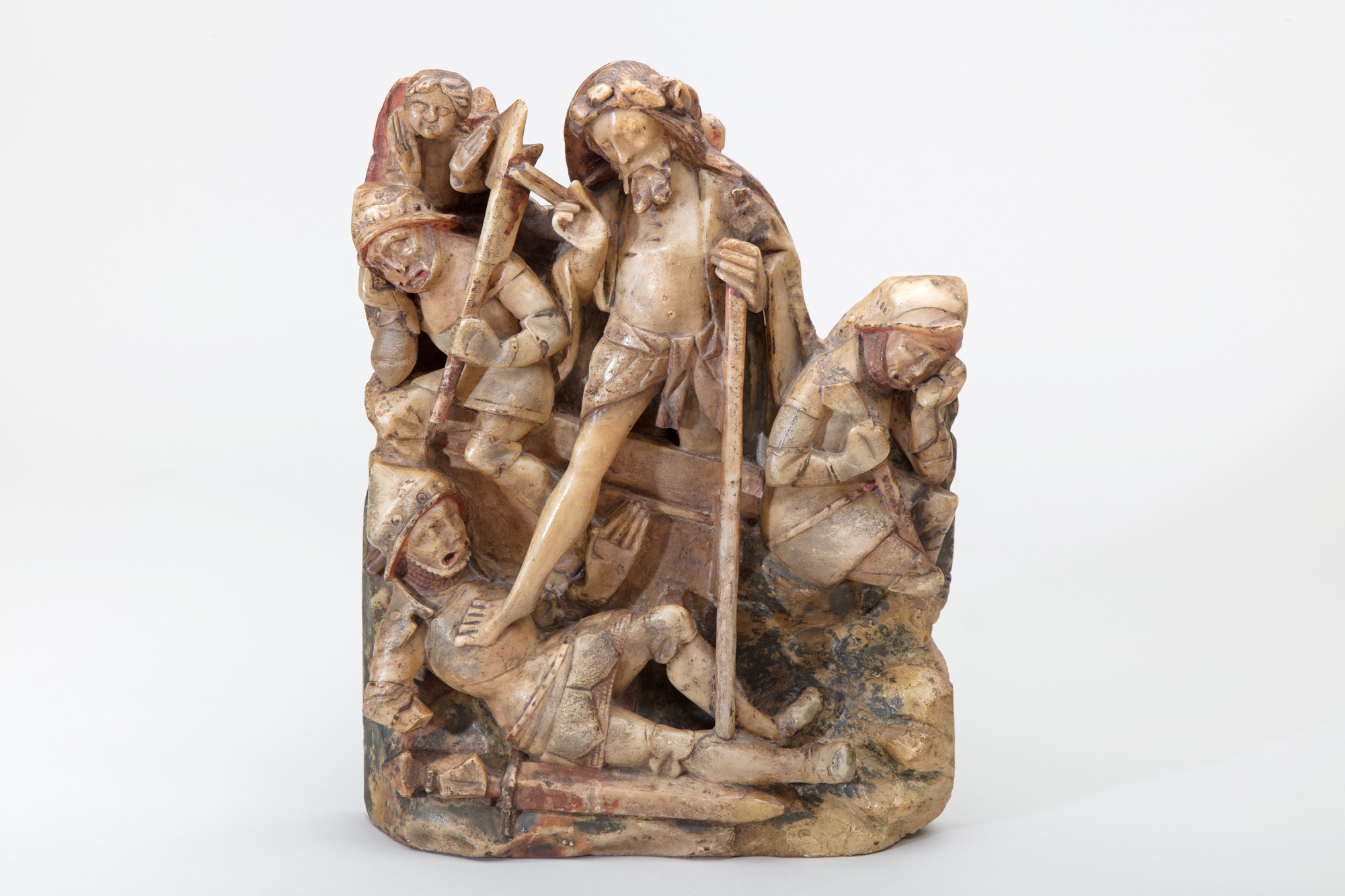 Easter is the most significant festival in the Christian Calendar. On Good Friday Christ’s death is remembered in sorrow and on Easter Sunday itself there is joy at his Resurrection. The stories of Holy Week, Christ’s Passion, the Crucifixion and Resurrection have been conveyed to believers for nearly two millennia and have been depicted in many genres of art. Thousands of paintings, sculptures and other works have been created as perpetual reminders of these dramatic and emotional events. In the Northern European Gallery at Compton Verney there is a small alabaster panel that depicts Christ miraculously rising from the tomb, his Resurrection, with consummate skill.

Scholars debate whether Christ was resurrected in body or in spirit, but that need not worry us here. The choice of alabaster helps to convey a sense of other worldliness. It has a luminous, insubstantial, almost translucent quality that reminds us of Christ’s words to Mary Magdalene when she encounters him at the tomb shortly afterwards: ‘noli me tangere’ (do not touch me), which suggest that Christ is no longer formed of earthly flesh.

In this panel, the stone that has been put in place to seal the tomb is no barrier to Christ and he climbs, straight and purposeful, out of the grave. Yet his action does not wake the sleeping guards and his foot and staff rest on a soldier without causing any disturbance. 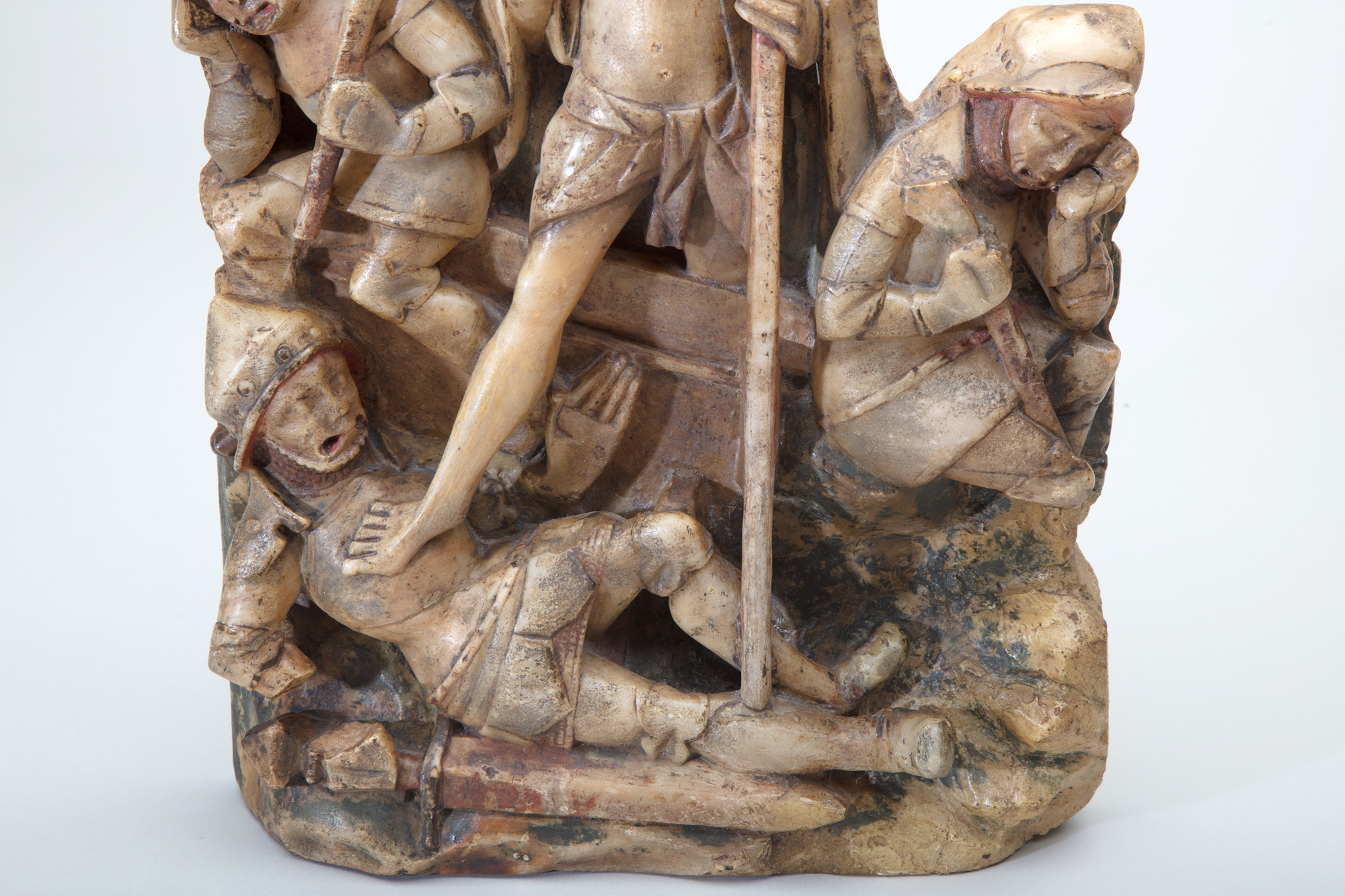 In contrast to Christ, the soldiers are men of the earth. Their faces are those of rough Roman men and they sprawl in ungainly poses, huddled up, asleep on duty, completely unaware of the miracle taking place in front of their closed eyes and oblivious to Christ’s hand raised in blessing and forgiveness.

Although the traces are now quite faint, you can still see that the artist has added colour to the figures of the sleeping soldiers, as if emphasising their human, earthly qualities in contrast to the radiance of Christ, much of whose figure has been left uncoloured to let the qualities of the pale alabaster shine through. This ability either to take a colour or remain pure was one of the reasons why alabaster was a very popular material from which to produce religious art in the Middle Ages. 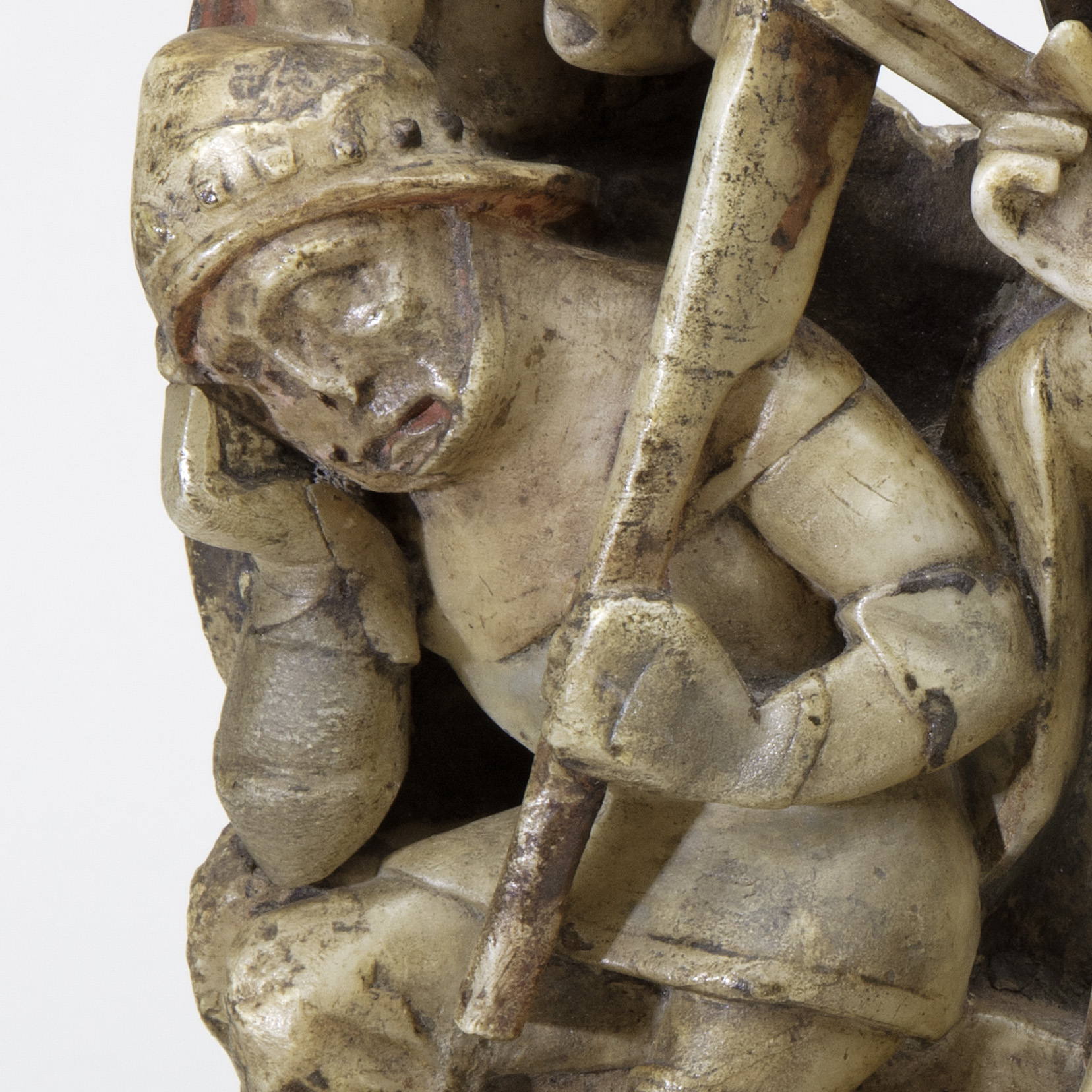 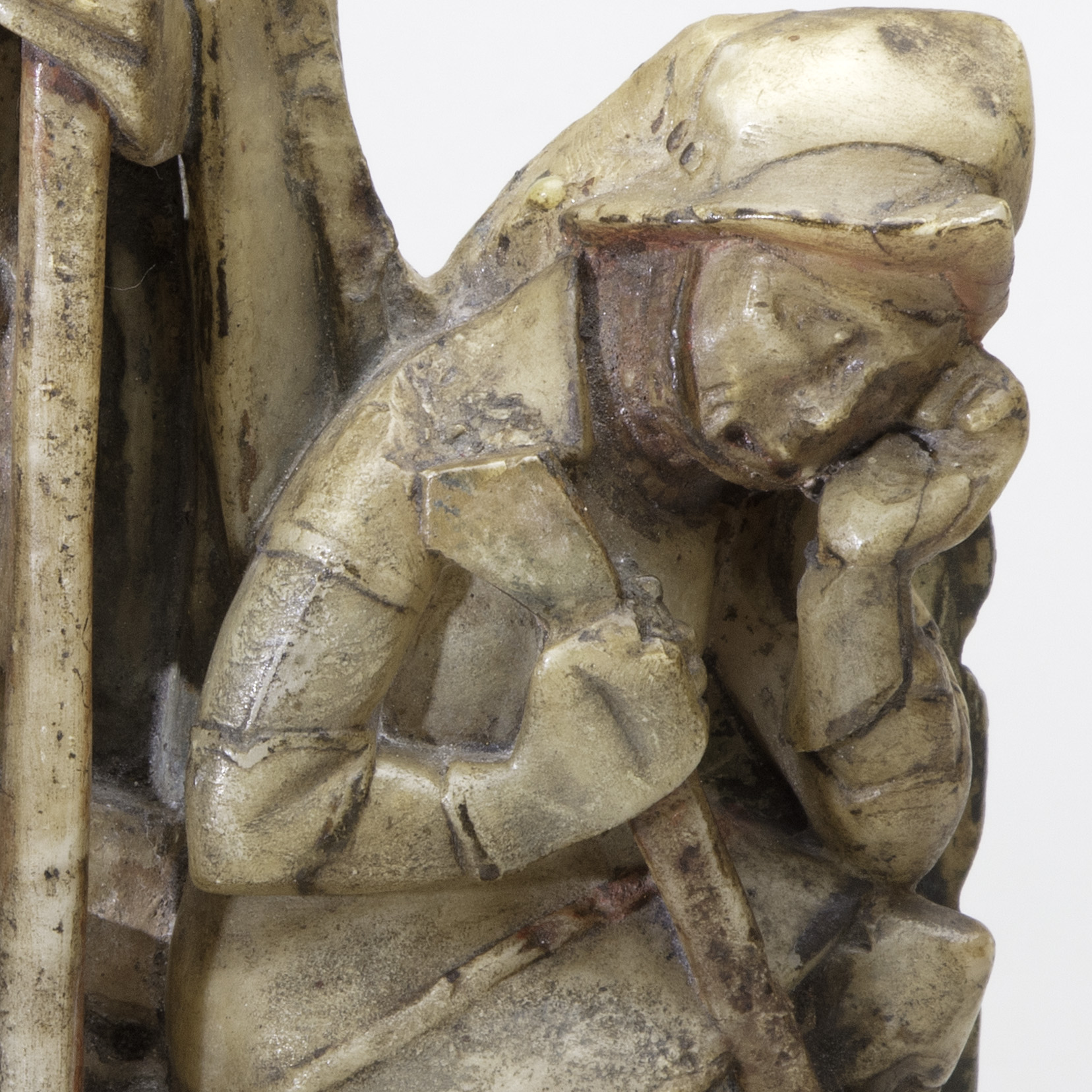 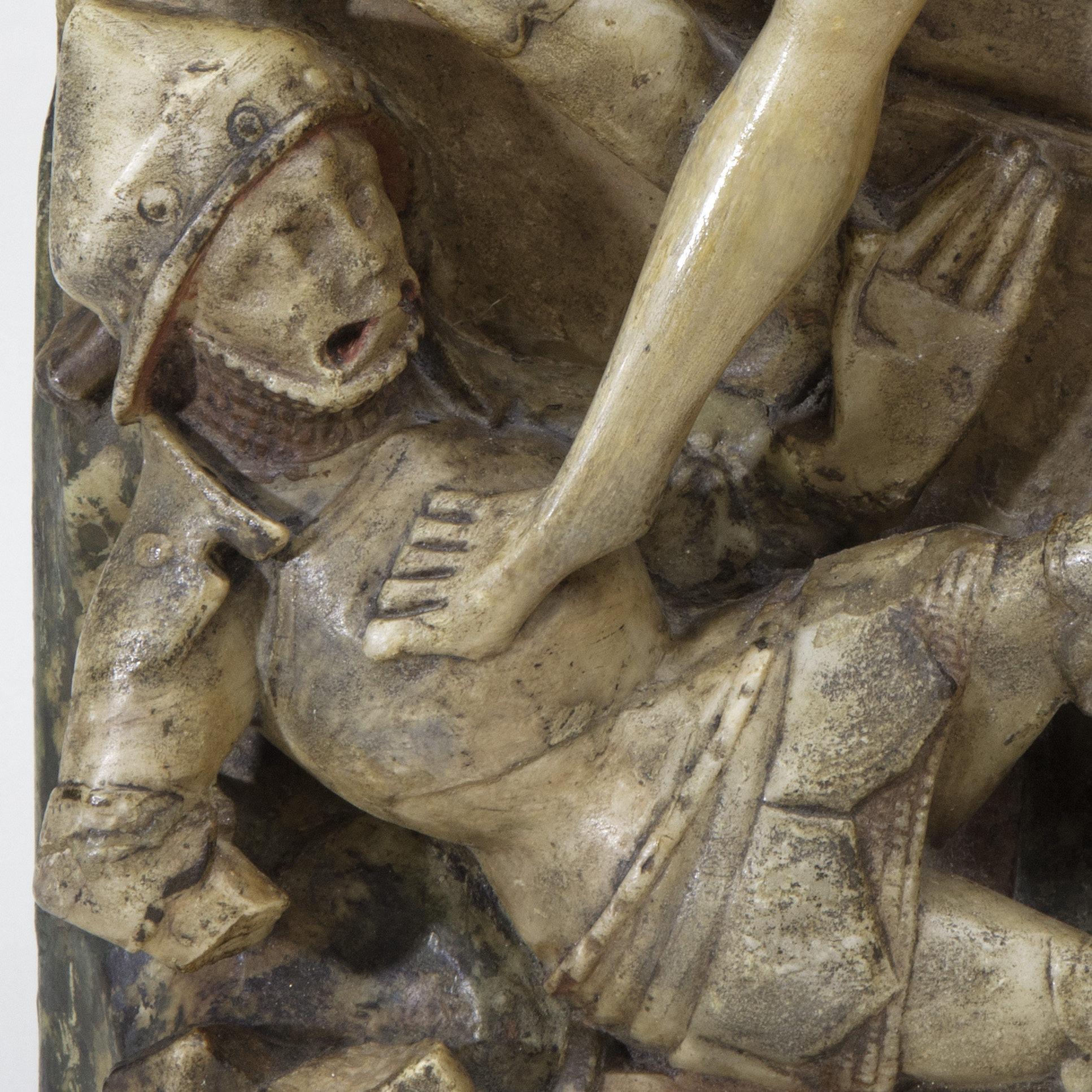 Alabaster is a form of smooth gypsum and England was rich in seams that produced a fine-grained version that was easy to carve. In fact, the material is so soft that a fingernail could leave a scratch mark and so the skill and care required of the carvers was extraordinary. There were large number of quarries in Yorkshire, Derbyshire and the central area of Nottinghamshire, and the city of Nottingham was a major medieval centre for the production of carved alabasters. The excellent craftsmanship produced there was in great demand by religious institutions and by private individuals in England and abroad. Indeed, these much-desired works were transported to Europe, particularly to Germany, France and Bohemia, to Scandinavia and as far away as Iceland! Unfortunately, though, little is known of the carvers themselves – who were known as ‘alabastermen’, ‘kervers’ and ‘marblers’ – and the sculptor of this beautiful piece remains anonymous.

This exquisite panel has now been removed from its original context. We don’t know who commissioned it, where it might have stood, or what other scenes might originally have accompanied it. It is possible that it was originally displayed in a wooden box, with hinged doors that could be opened for private worship. Of great significance to us, though, is the fact that this is one of the oldest artworks in the Northern European Collection at Compton Verney. Whether the visitor to the gallery views the piece with the eye of religious faith or with simple pleasure in its artistry and execution, it is thrilling to know that the work can still bring joy, as was its original intention six hundred years ago.