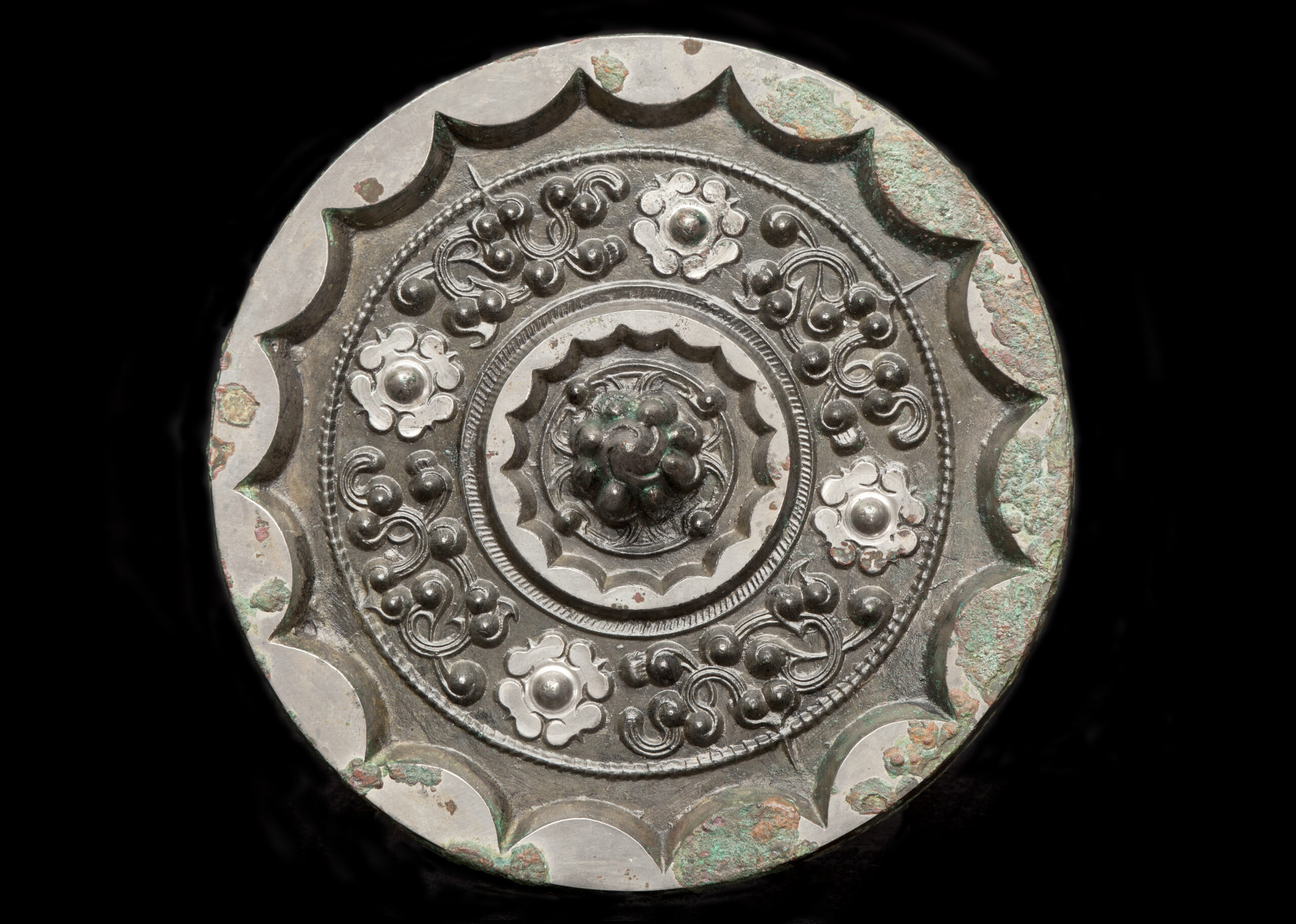 If you have visited our Chinese collections, you must have been impressed by the large, magnificent ritual objects, but have you ever paid attention to the small but delicate bronze mirrors? There are 11 Chinese bronze mirrors in the collection at Compton Verney. The earliest one can be dated back from the Warring States period (around 475 BC – 221 BC). Most date from the Han dynasty and the Tang dynasty, the two most prosperous periods in the history of China. 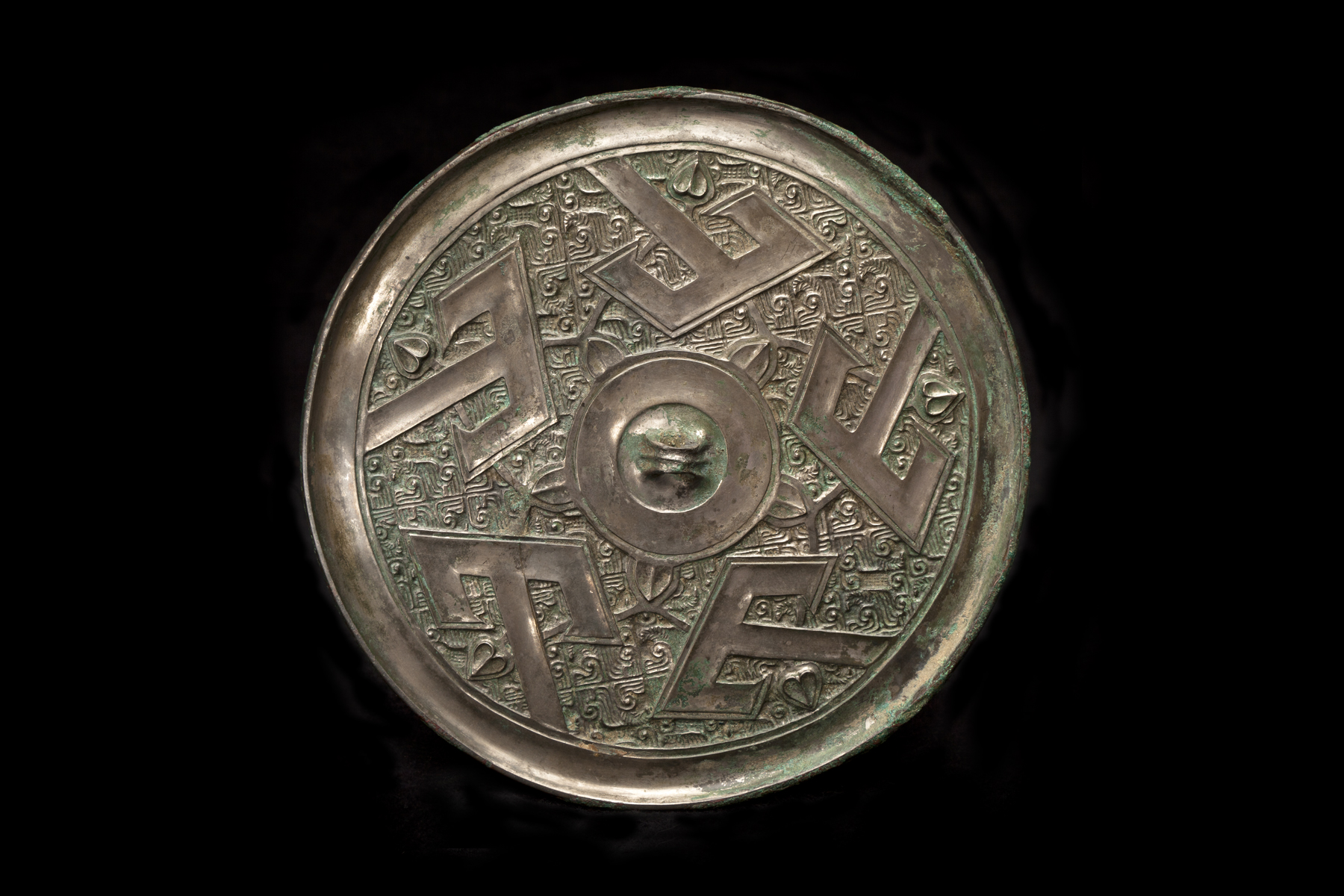 In daily life, we see ourselves in the mirror all the time; but the quality, techniques, patterns and designs of these bronze mirrors also reflect the conditions of China at a specific time. For example, the patterns of the Han mirrors were about mythology and religion, while the Tang mirrors focused more on depicting plants or animals. 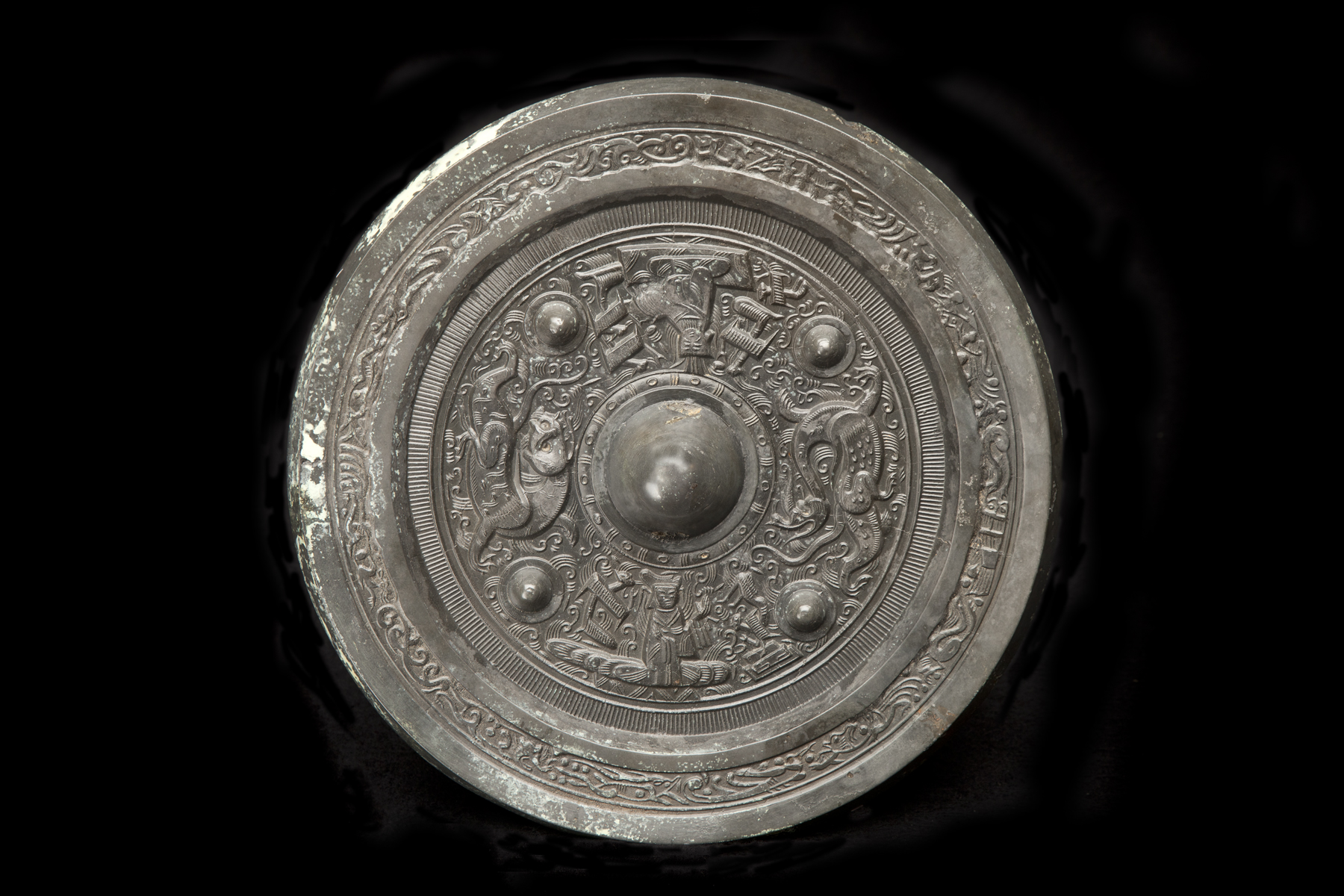 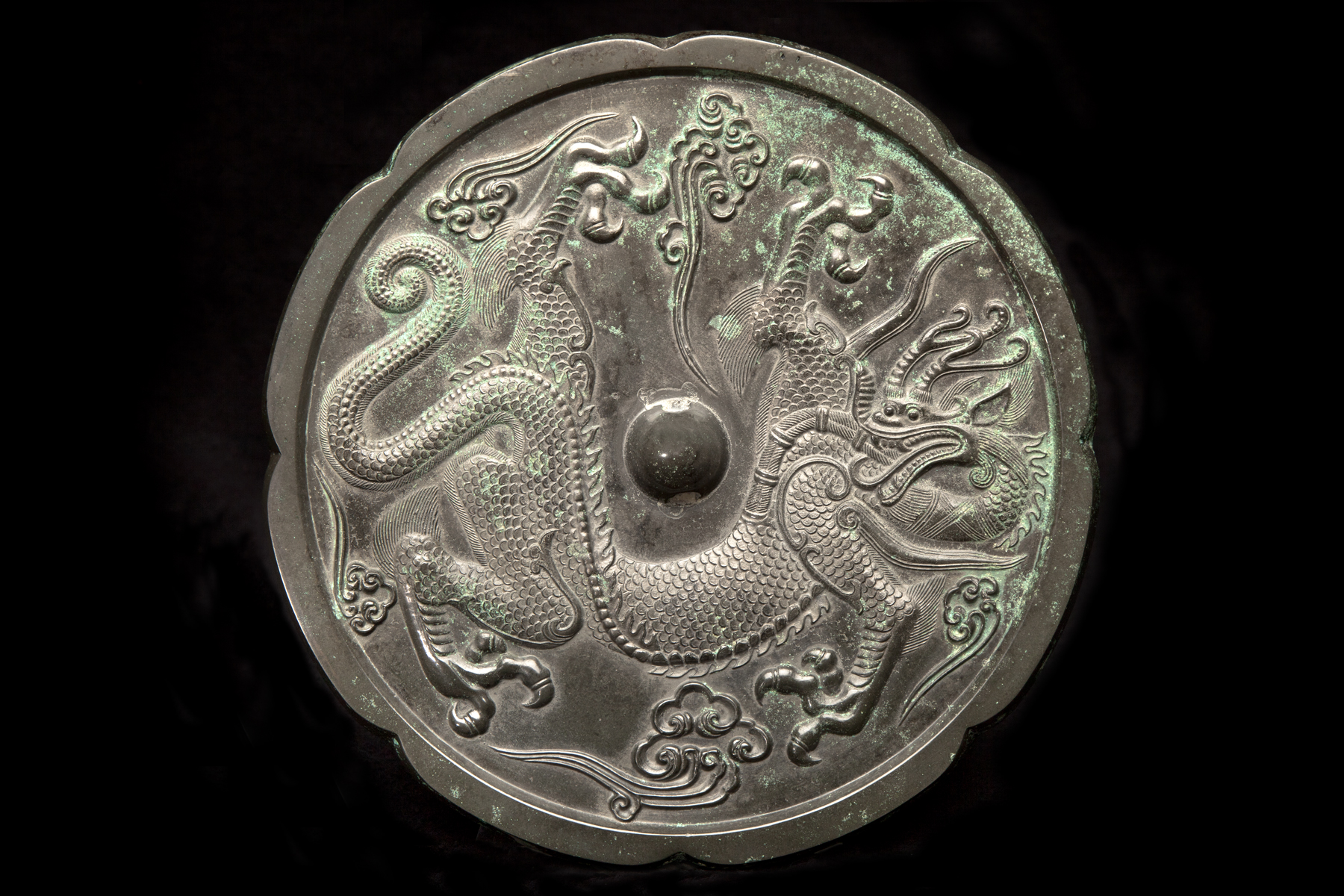 With bronze mirrors, one side of the mirror will be highly polished and used for reflection, while the other side will be decorated with various patterns, including mythical beasts, immortals, stars, clouds, geometrical shapes and plants. There is a knob at the centre of each mirror and it is always decorated, sometimes as a mountain and sometimes as an animal. The knob is called the mirror button, and if you look closely at the mirror button from the side view, you will find a hole on it. This allows for a cord to be threaded through the hole, so that the mirror can be easily fixed on a stand.

How did people in ancient China use these mirrors? In the earlier period, like other bronzes, mirrors were used as a ritual object in the sacrifice; in the Eastern Zhou dynasty, most mirrors were still precious and only accessible to royal families and aristocrats. With the development of the handicraft industry, bronze mirrors gradually became an everyday object and were available to the common people. To keep the mirror free from dust, people invented mirror cases made of silk or wood, which have been excavated in the tomb of the Han dynasty. Once used for a while, the reflection side of a bronze mirror will get cloudy and need to be polished. In the Qing dynasty, bronze mirrors were gradually replaced by glass mirrors introduced from Europe.

Among all the mirrors in our collection, my favourite one is the xingyun (star and cloud) mirror for its special decoration. 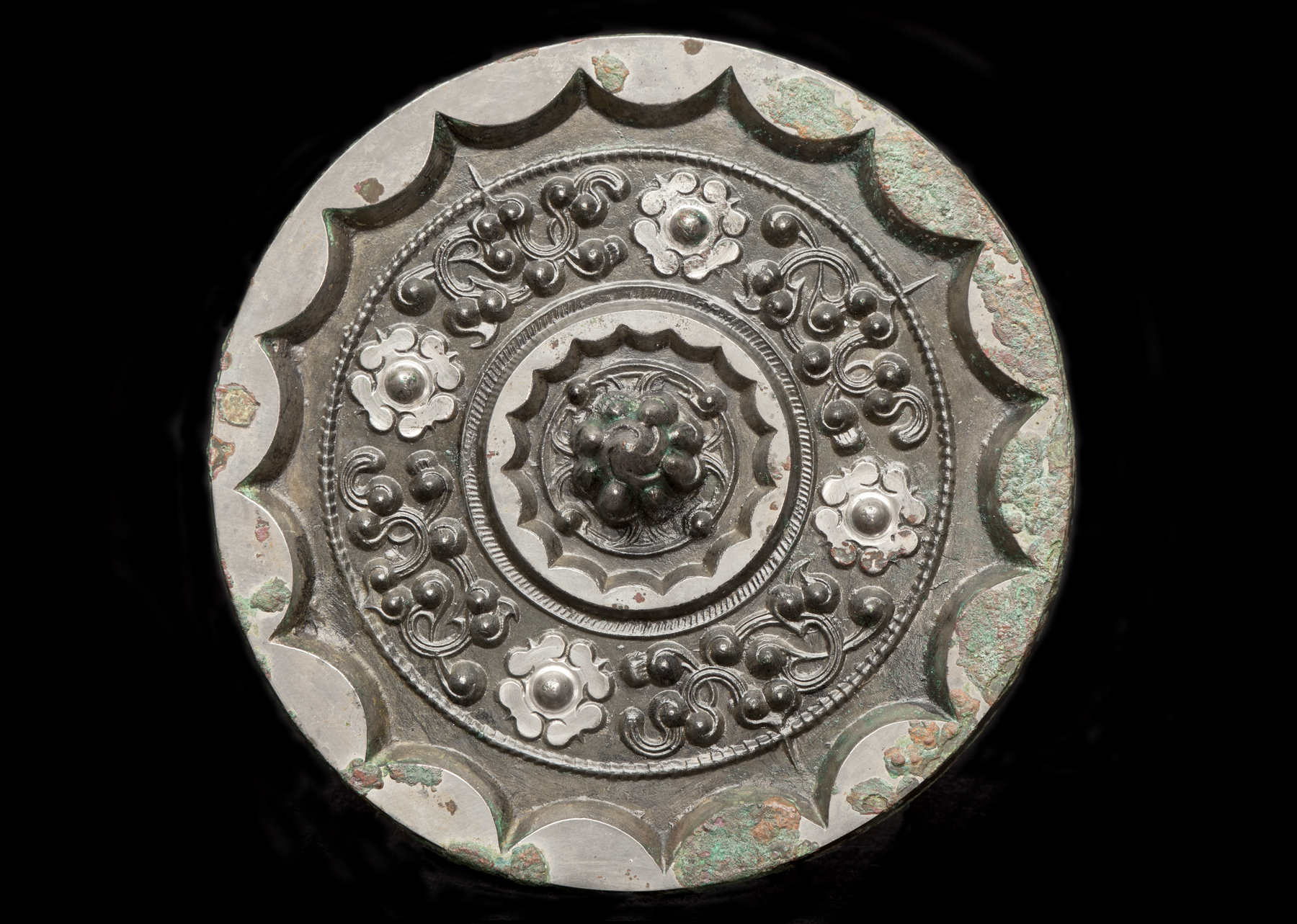 Early archaeologists gave the mirror this name because if you look down at this mirror, the bosses look like stars spread over sky while the curves cast in relief are like the fast-moving clouds floating between the stars. However, if you look at the pattern from a side view, you will have a different finding. The bosses look like numerous hills and the mirror button in the middle is like the highest mountain among all these hills. The mountain is delicately cast, and you can see details of its texture clearly. 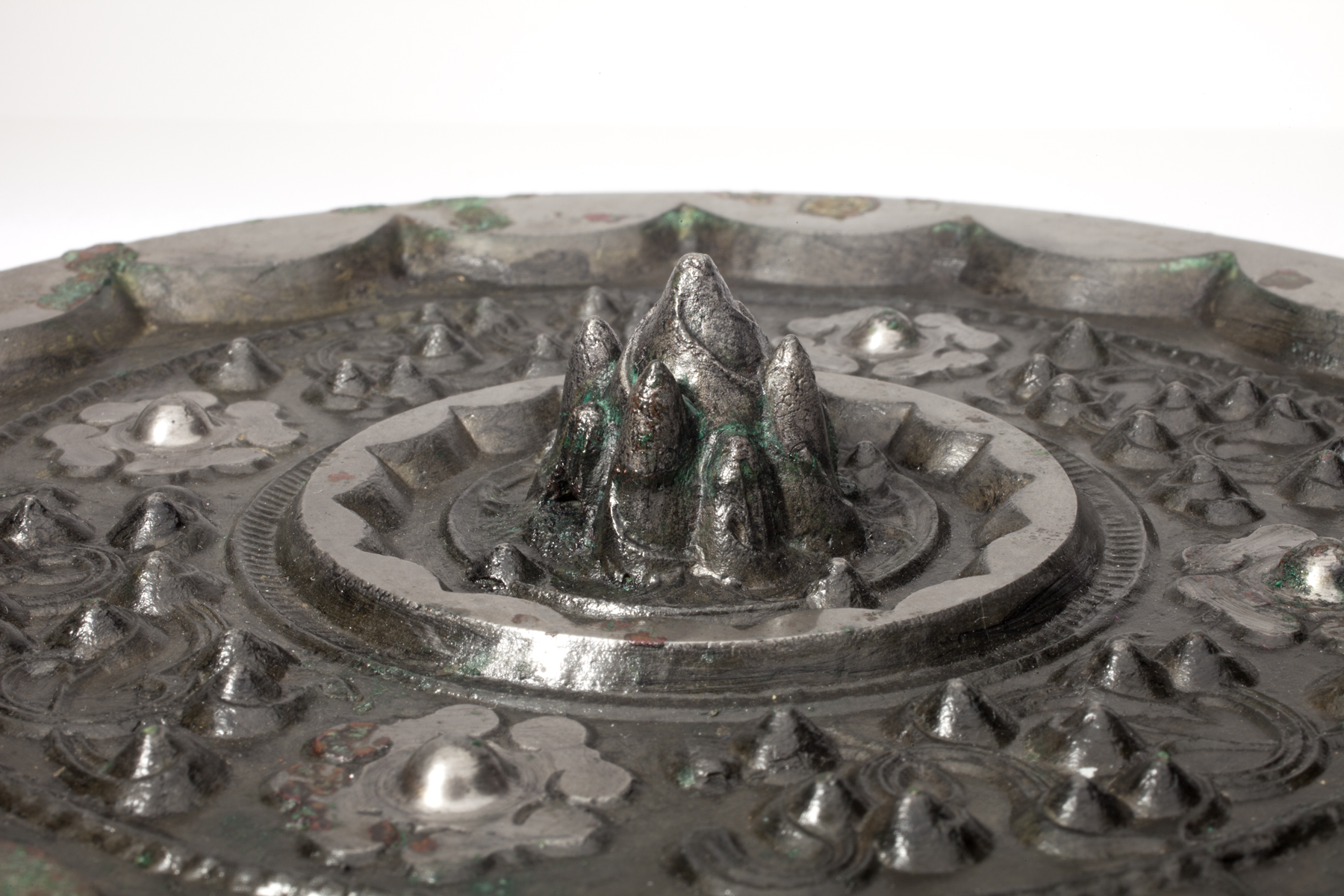 Wenrui Li recently completed a remote summer internship in Compton Verney’s Chinese collection, facilitated by the University of Oxford’s Careers Service and funded by the Higher Education Innovation Fund (HEIF), the Oxford University Heritage Network (OUHN), and the Heritage Programme at The Oxford Research Centre in the Humanities (TORCH)