Have you been watching ‘Bridgerton’, the period drama released by Netflix on Christmas Day, based on a series of books by Julia Quinn? As the story unfolds we see the aristocratic hero, the Duke of Hastings sparring with his trainer and friend, Will Mondrich, a professional prize fighter. Both men are black. In another episode Will triumphs over his opponent in a bout enthusiastically watched by a crowd of fashionable men and women, and one of the characters, Lord Featherington, squanders his fortune and his daughters’ prospects by betting heavily on the wrong man.

Could any of this really have happened in Regency Britain? Refreshingly, in the world of ‘Bridgerton’, dukes, boxers, and queens can have skin of any colour. This was not true in nineteenth-century England. There have certainly been a few very popular and high-profile black writers and activists such as Olaudah Equiano and Ignatious Sancho, and aristocratic figures like Dido Elizabeth Belle, whose histories are known to us today.  However, only a minority of black figures from this time are recorded in paintings and other sources.

Take a closer look at this pair of figures from the period in Compton Verney’s collection of British Folk Art, made in the Staffordshire Potteries c 1815. 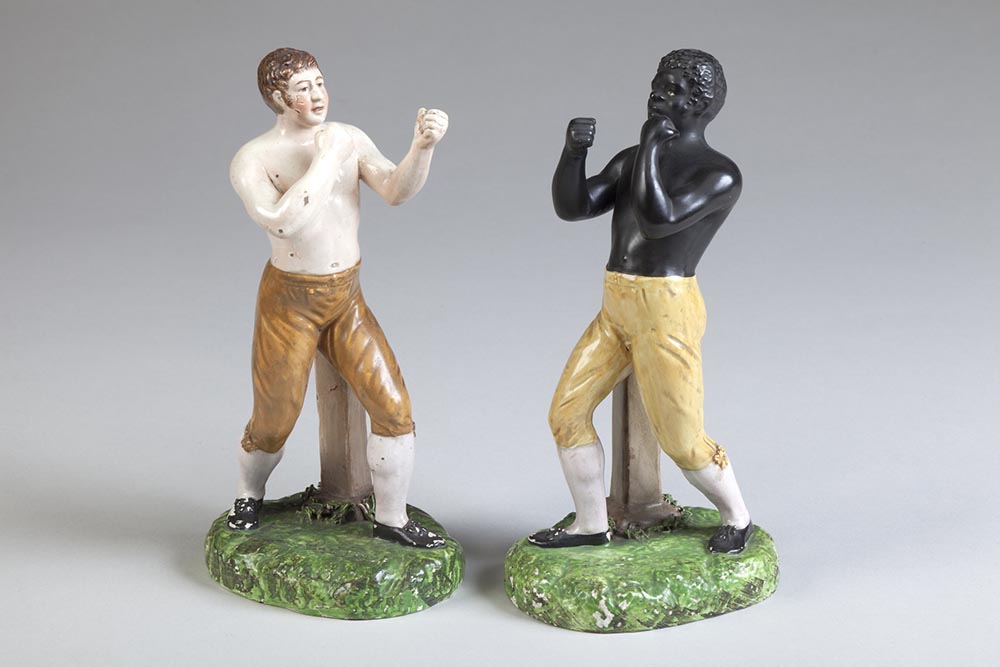 On the left is Thomas Cribb, British Boxing Champion. On the right is Thomas Molineaux, a freed slave from Virginia, America. They met twice in two very famous matches and these figures would have been made to commemorate the occasions. Top class pugilists at this time enjoyed celebrity status whatever their colour or background and fights attracted huge .

The Queensbury which regulated boxing in the UK, were not published until 1867. Thereafter, gloves had to be worn in all boxing matches, but at this time we are talking about prize fighting, or bare knuckle boxing.

The British Champion met the contender for the first time at Copthorne Common in Sussex (now a golf course) in front of a crowd of 10,000 spectators. It was December 1810. Boxing was a very popular sport at this time; betting was rife and significant sums of money changed hands. With a lot at stake, feelings and tempers were running high. As the rain poured, the spectacle descended into travesty. As Molineaux gained the upper-hand, he was taunted by racial abuse. When he had Cribb pinned against the ropes, a mob of 200 people invaded the ring. In trying to prise open his fingers they injured and probably broke his . At this point Molineaux was certainly winning, but the fight was paused when he was unfairly accused of cheating by concealing bullets in his fists. This bought valuable time for Cribb to recover while the referee investigated. After 35 rounds, Tom Cribb was declared the winner and ‘world champion’.

There are uncomfortable parallels with the crowds at some sporting events today, two hundred years on, particularly football matches. Then, as now, racist abuse was partly a demonstration of inherent bigotry and partly a deliberate device intended to influence the outcome of the contest by putting one team off their stride and applying pressure to match officials. Some of the crowd at Copthorne Common would have wanted Molineaux to be beaten because he was black and some because he was the underdog whom the majority would have backed heavily to lose.

In dire need of money, and aware of how close he had come to victory, Tom Molineaux requested a rematch by publishing an open letter to the Champion in a newspaper. They met again in September 1811 at Thistleton Gap, Rutland. This time the crowd numbered 20,000, but the boxing fraternity was better prepared and formed a kind of human shield around the ring, beating back the racist mob with sticks. Molineaux was knocked out in the 11th round with his jaw broken.

After he retired, Tom Cribb became a coal merchant and then a publican. His pub was the Union Arms in Panton Street, St James. It is still there and now bears the name The Tom Cribb in his honour. He died there aged 66.

Tom Molineaux continued to fight and give demonstrations but his health was poor. He suffered from tuberculosis and drank heavily. Unable to recapture his earlier fitness and success, he died in Galway, Ireland in 1818, sadly aged only 34.

It is worth noting that although black fighters like Molineaux had to endure racial abuse from spectators, among the boxing fraternity they received support and friendship. In a sense, their colleagues would ‘take the knee’ as sportsmen do today. For example, Molineaux’s trainer, Bill Richmond another freed American slave, became firm friends with Tom Cribb. He had a very successful career first as a fighter and then as a trainer and manager. He was a celebrity and was chosen by George IV to be an usher at his coronation in 1821. Rivals in the ring, he and Cribb spent more and more time together after they retired and a plaque on the wall of the Tom Cribb public house records that Bill spend the last night of his life there drinking and talking with Tom.

So it is all true, the huge crowds, the high stakes, the celebrity sportsmen, the fashionable and high profile patrons, the friendships – but in reality a shameful element of racism all too familiar to us today.