A Celebration of Motherhood – The Holy Kinship 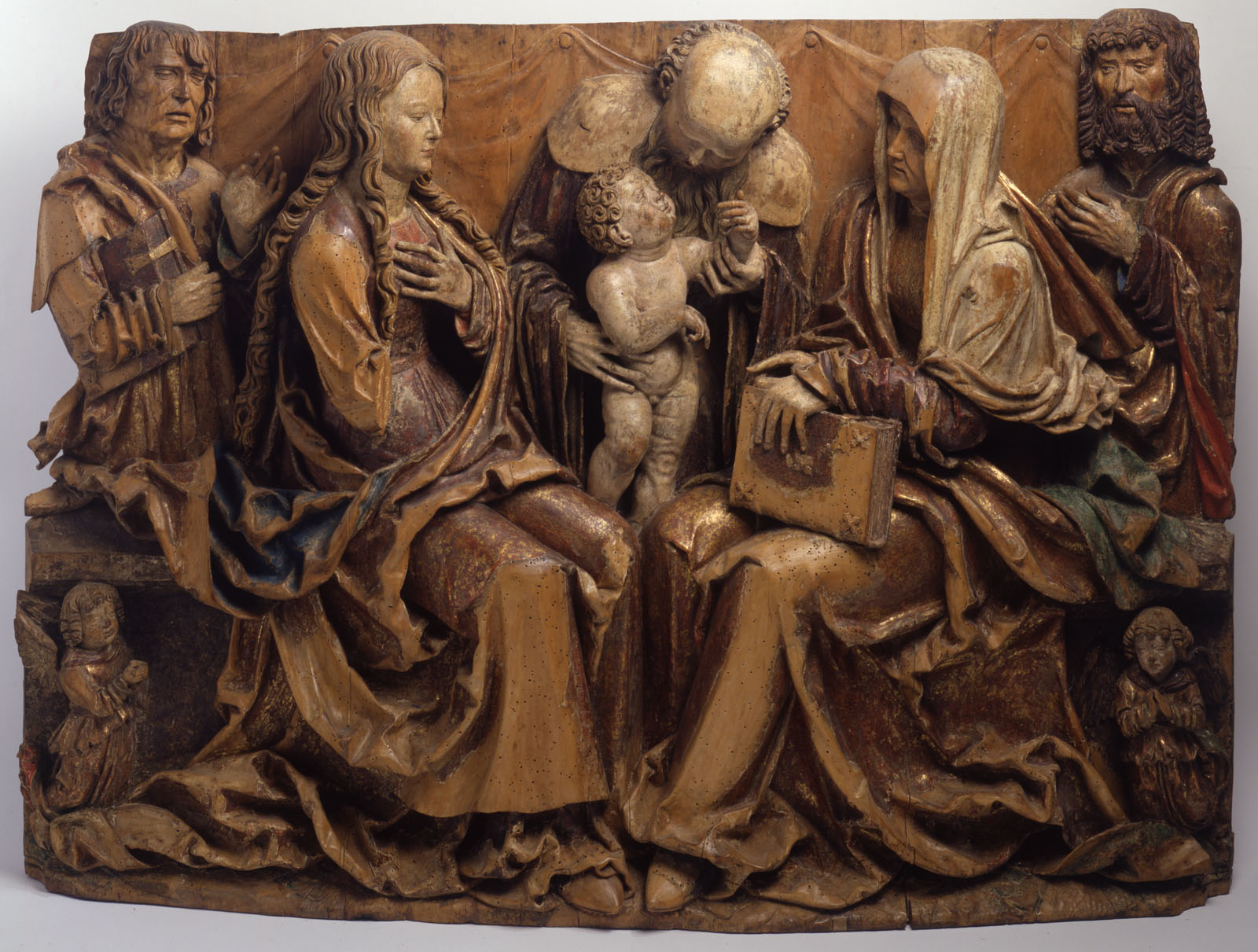 Attributed to the Circle of the Master I.P. – The Holy Kinship © Compton Verney

As winter draws to a close people look forward to spring and to Mother’s Day or Mothering Sunday. This year it feels even more special, as families look forward to being reunited after the restrictions of the pandemic. Whilst the modern Mother’s Day was only created in America in the early twentieth century, Mothering Sunday has been a very important day in the Christian calendar for hundreds of years and takes place on the fourth Sunday in Lent, this year the 14th of March. On this day, people can celebrate their mothers and also Mary, the mother of Jesus. Such has been Mary’s popularity, many thousands of works of art have been created to enable worshipers to honour her.

The majority of artists focused simply on the mother and child, but at Compton Verney we have a magnificent work of devotion that includes some more members of the Holy Family. The piece was possibly made by an artist known only as ‘the Master I.P.’, or by members of his circle, in about 1520. The scene, which is 87.5cm high by 123 cm wide, has been carved in a limewood relief and would originally have formed part of a large altarpiece.

This is a family scene where Mary and Joseph, as proud parents, are introducing their baby to his maternal grandparents, Anne and Joachim, for the first time. Mary’s parents are not mentioned in the Bible but were identified in apocryphal sources and became familiar and much-loved characters in the very popular Legenda Aurea or Golden Legend, written in the thirteenth century.

The closeness of the family is emphasized by the formation of an inner semicircle with Mary on the left, her mother Anne on the right, and her father Joachim standing in the centre, supporting the baby Jesus. 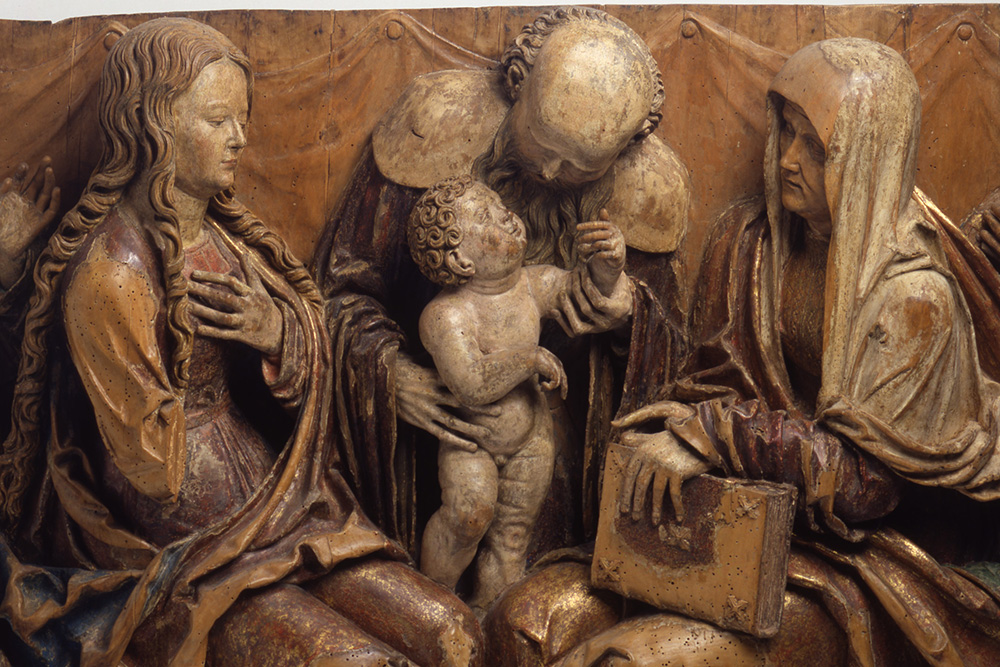 This underlines the blood relationship, as Mary’s husband Joseph is not the father of Jesus, so is standing close but outside the circle to the right. What is particularly relevant to Mother’s Day is that there are two mothers in this scene, Anne and Mary, and consequently two children who will honour their mothers.

Anne is holding a book, which is a reference to the story that Anne taught Mary to read the scriptures, one of the duties of a good mother. In depictions of the Annunciation, Mary is often shown reading the Old Testament prophets, which allows her to understand the destiny that is being revealed to her by Gabriel. Without her mother’s loving lessons, Mary would not have been prepared for her duty. 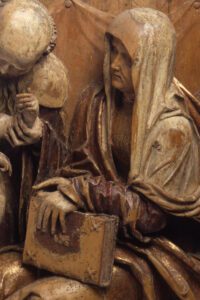 Did this moment have a special resonance for the man standing to the left? 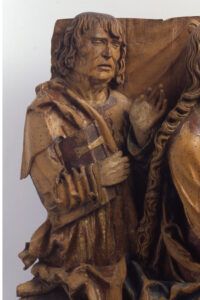 His identity isn’t obvious and he is detached from the circle but he, too, is carrying a book. His facial features are highly individualised, and this suggests that he might have been modelled on a real person – perhaps the donor (the person who paid for the altarpiece). It was common at this time for donor’s to ask artists to include their likenesses in religious scenes, elevating their status by immortalising them beside the Holy Family.

Limewood was the ideal medium in which to carve this special moment. Popular with carvers for works of devotion, it was easy to work and enabled them to show their skills, seen here in the depiction of pleats and folds in cloth, and in the flowing waves of Mary’s hair. 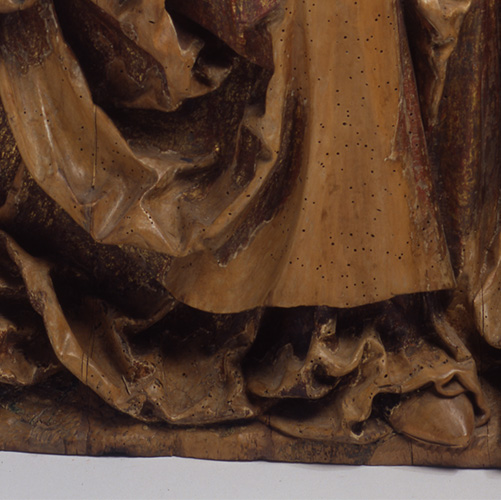 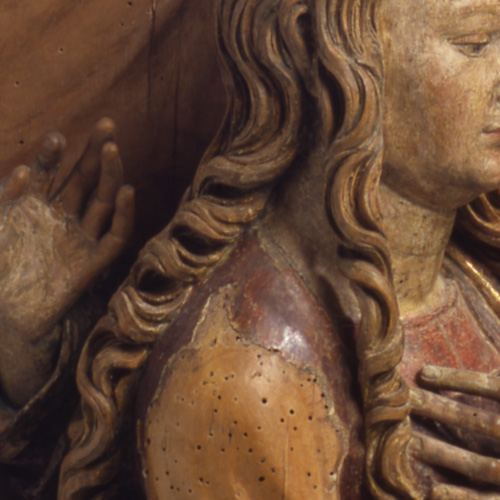 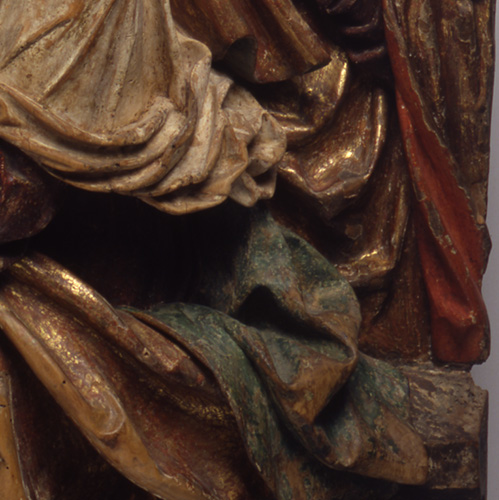 The panel would have been painted in several colours, including blue, red and gold, the traces of which can still be detected. Brilliantly illuminated by the light from hundreds of flickering candles, it would have glowed with the intensity of motherly love.

Today, the panel is seen in isolation, the paint has faded, the limewood has been damaged by woodworm, and the piece is no longer viewed as a work of devotion. Nevertheless, it has not lost its power to convey its message of a gathering full of joy and familial love – it is as palpable and moving as it was in the sixteenth century. Again this year on the 14th of March we will celebrate the enduring power of motherhood.