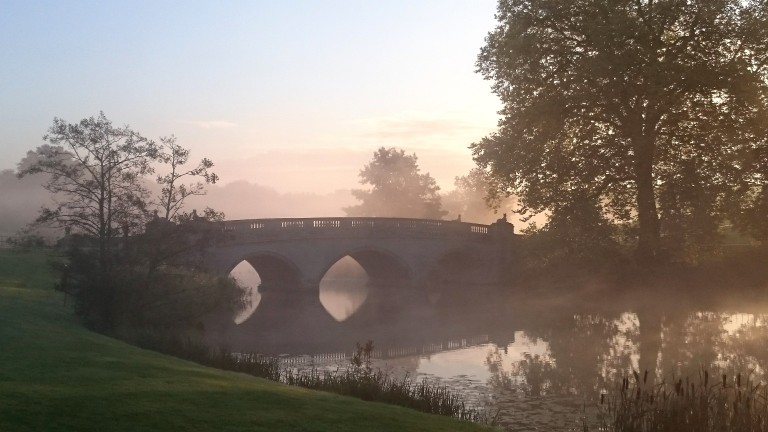 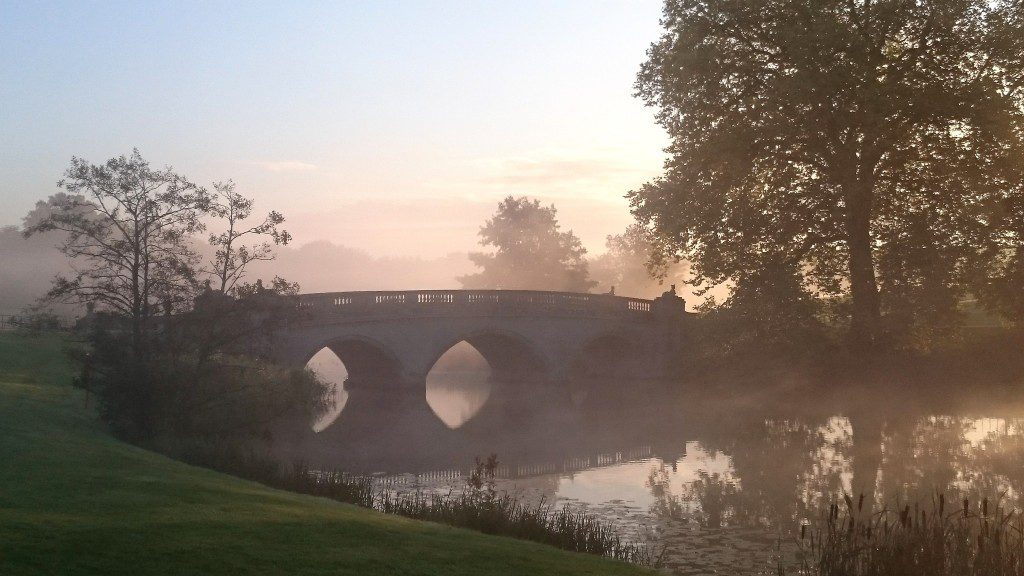 It would be remiss of me to let another day pass without a word or two about the results achieved at Compton Verney by Lancelot ‘Capability’ Brown. It was Brown’s ‘Place Making’ efforts, in the pursuit of fashion which put the garden on the same page as many other notable landscape gardens in the eighteenth century – a fact that remains as relevant today as then.

Invited along, (and paid for!) by the prominent 14th Baron Willoughby de Broke, John Peyto-Verney in 1768, Brown’s work followed that of Robert Adam who had spent the previous eight years updating the house. With a flick of the quill away went the previously fashionable formal garden to be replaced with a new, naturalistic style landscape with trees, serpentine lake plan and rolling acres of grass for farming and leisure pursuits.

Teams of labourers and garden staff spent several years transforming the gardens and landscape to Brown’s new design, whilst master tradesmen set to work on a few very notable garden additions. The whole site would have been a hive of activity as the gravel walks, canal and parterres of the previous garden were gradually replaced by smooth lawns connecting the house with the tamed landscape all around. Around the composed view were placed architectural highlights for both aesthetic and practical reasons as you’ll discover below… 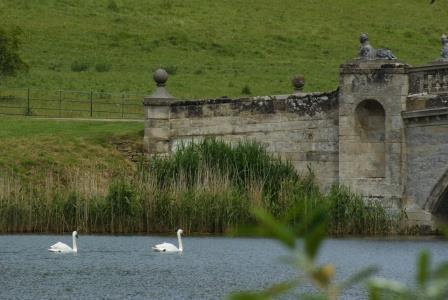 The chapel, at the forefront of Brown’s achievements at Compton Verney, is a building receiving much focus having undergone a thorough restoration with the help of Heritage Lottery Funding amongst others. Light once again floods in through restored windows to the cavernous interior which is particularly known for its high-quality acoustics. Ornamental plasterwork and monuments have been restored to complete the scene.

From a plan supplied by Brown, the chapel cleverly copies the roof lines of the mansion, ensuring it complements the existing buildings when viewed from the main approach drive to the house. The chapel also quite usefully screens the walled garden which although newly laid out, would not have been part of the ornamentally focused landscape. The chapel was the nearest new structure to the main house, being reached via a stone path circuit, and was used to house the re-sited monuments from the earlier demolished chapel. 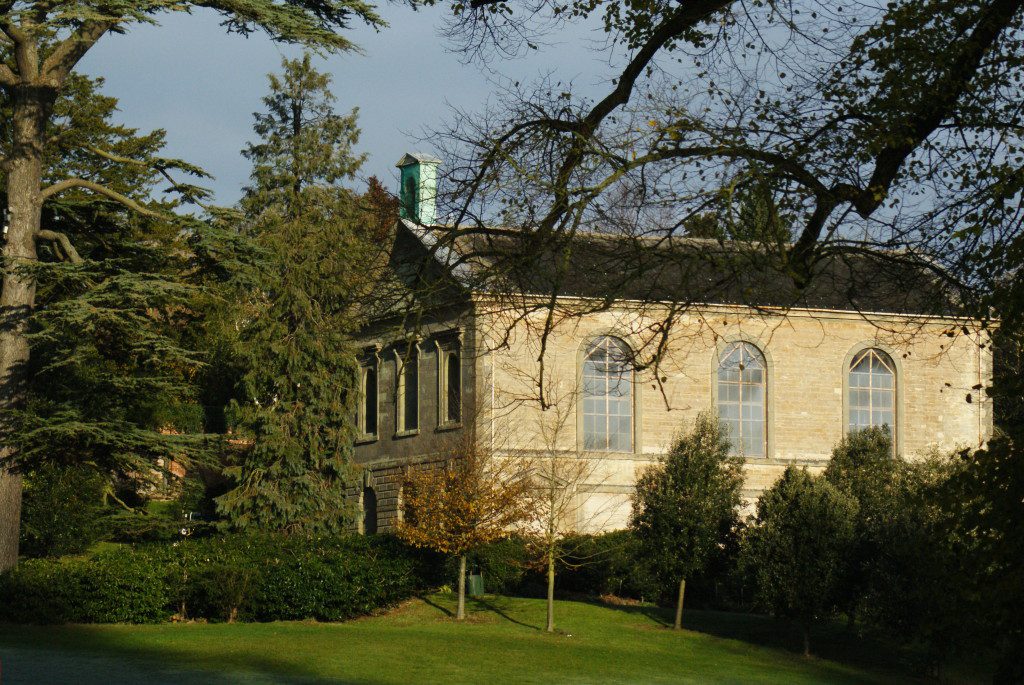 Elsewhere, and set within the wooded garden area known as the ‘Greenhouse Plantation’ was a heated, classically designed greenhouse. This greenhouse appears to have been used equally for entertaining as for the growing of plants considered tender at the time. The greenhouse would have been a must-see for any 18th century invited guest, and especially during poor weather, with its carefully composed landscape views from the windows. A footpath circuit led directly past its front doors, and an early inventory suggests furniture and paintings, as well as a collection of heath plants were maintained within.

The greenhouse was completed during Brown’s period of work on the Compton Verney landscape, with tradesmen common to his other structures. The greenhouse designer is unknown, and the building was eventually demolished c1945, although an image taken by Country Life in 1913 fortunately records the former splendour of the structure, with four sphinxes placed along the south front.

In addition to the two buildings mentioned, three further structures are known to have arrived under Brown’s command, two of which were bridges. The main and more ornamental bridge is positioned to be seen chiefly from the house and its ornamental design could possibly be from the hand of Robert Adam. The bridge designer cunningly used more sphinxes, set at eye-level from a traditional horse-drawn carriage, to effectively pull the travellers vision close for a moment before the house is again revealed; appearing from behind one of Brown’s classic Cedar of Lebanon trees. 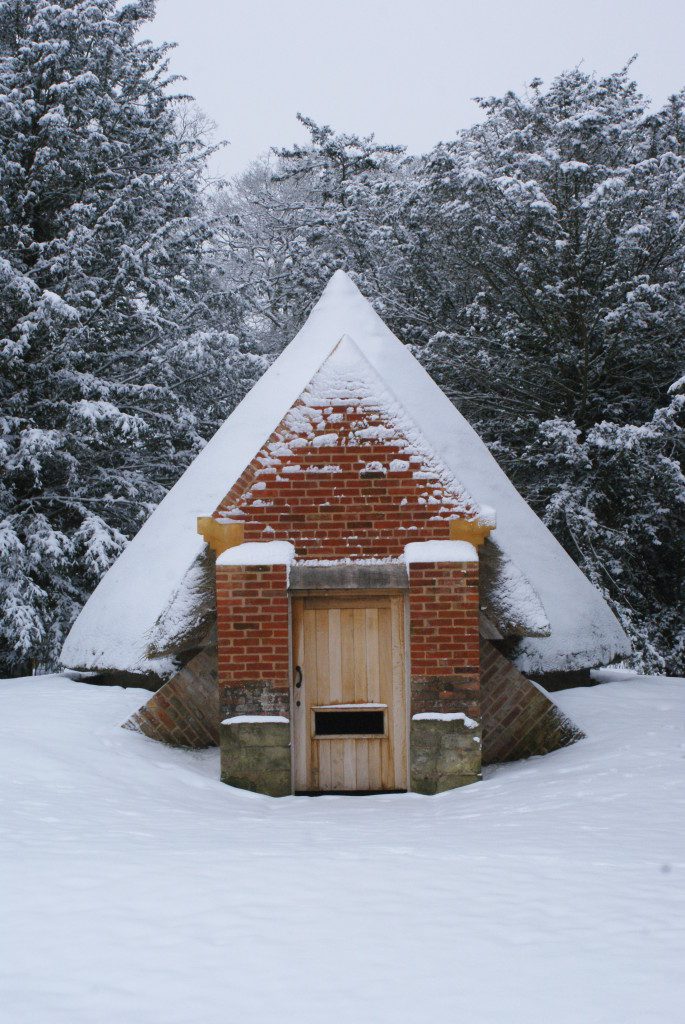 The second bridge is a simpler affair visually although it is positioned carefully; acting as the main sluice that controls the water level for the middle and upper pools. Water falls through an aerating spillway system to the lower pool which is approximately six metres lower than the middle pool. When viewed historically from the house, the drop in height between the pools was masked somewhat by the careful placing of evergreen trees; possibly encouraging the viewer to see the two lakes as one continuous serpentine water.

One final architectural piece completes the landscape at Compton Verney; the Ice House. Installed during the first half of Brown’s work c1771, it contains a practical underground storage pit for ice that was most likely harvested from the nearby Middle Pool. The structure was plunged into shade by the thatched roof and surrounding Yew trees, and its approach tunnel had two doorways to further insulate against the morning sun. The ice would have been used for various chilling activities and especially for ice cream and elaborate sorbet creations. 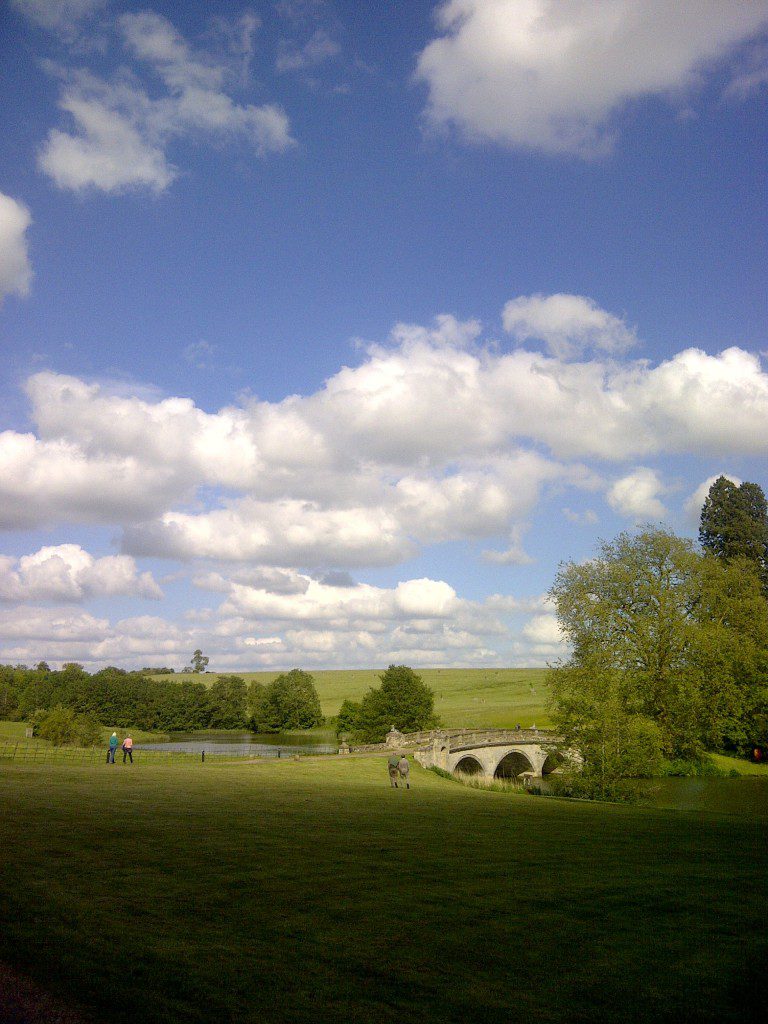 The landscape is simply beautiful today, retaining much of the charm I’m sure it had back in its heyday. For certain, the passage of time has left its mark, Dutch Elm Disease for instance put pay to many parkland trees; a later fashion for conifers has altered somewhat the pure Brownian view; and lake silting due to minimal maintenance over the centuries has seen the arrival of many marginal ‘weeds’ that would surely offend the eye of our Mr. Brown were he to see it today.

Despite these changes, the landscape retains a character broadly similar to that left behind by Brown. The stone path circuits around the grounds have been largely restored now so those intended circuits can be followed once again. The buildings are being actively preserved and maintained, and the plantation known as the Ice House Coppice continues to be improved. The wider parkland, whilst in divided ownership is in good order throughout, with a large portion now managed as wild flower meadows.

My very personal view is that the landscape at Compton Verney has a unique strength of character; it has a real spirit of place and is a carefully considered derivation of all Brown’s earlier projects. True, it has many attributes that are to be found elsewhere, but is far from being an off-the-peg design. It’s Brown’s response to a brief given by the 14th Baron, and also to the unique conditions of the site; it is therefore matchless in its form.

The landscape at Compton Verney maybe a ghost of its past, but is enjoyed, appreciated and loved by many – do visit and see for yourself!